A systematic review was conducted by running a search in PubMed, Embase, Web of Science and Cochrane Library. Clinical randomised trials investigating bleeding and haemostatics after tooth removal in patients on antithrombotics were identified.

Tranexamic acid seems to effectively reduce bleeding, although its superiority to other haemostatics was not proven. In view of the rapidly changing landscape of antithrombotics and the lack of standardization of bleeding outcome, adequately powered clinical studies are required to optimise postoperative management in patients on antithrombotics.

In order to optimise postoperative management, the best haemostatics over different patient groups have to be identified and implemented in guidelines. 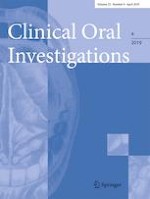 The use of smartphones in radiographic diagnosis: accuracy on the detection of marginal gaps

Efficacy of a thermally treated single file compared with rotary systems in endodontic retreatment of curved canals: a micro-CT study

Antibiotic prophylaxis may not be indicated for prevention of dental implant infections in healthy patients. A systematic review and meta-analysis