main-content
nach oben
Zurück zum Suchergebnis
​
print
Inhaltsverzeichnis
​
insite
Ausgabenarchiv
​
archive
​
insite
Drucken
​
print
» Jetzt Zugang zum Volltext erhalten
Wichtige Hinweise
Statement on conflict of interest: the author or one or more of the authors have received or will receive benefits for personal or professional use from a commercial party related directly or indirectly to the subject of this article.

We compared the short-term outcomes of 50 total hip arthroplasties performed through a mini-incision posterior approach with those of 42 arthroplasties performed through a conventional posterior approach. There were no significant differences in age, gender, and bodymass index between groups. The mean operative time was shorter (99±26 versus 123±30 min), and the per-operative mean blood loss was smaller with the mini-incision (339±210 versus 422±177 ml). There was no significant difference between groups in post-operative mean blood loss, mean inclination angle of acetabular components, percentage of hips with good inclination angle, and mean hip score at 6 months after surgery. There was one infection in the conventional group but none in the mini group. There were no dislocations or symptomatic pulmonary embolism in either group. With the mini-incision posterior approach, surgical invasion was reduced, and short-term outcome was as good as with a conventional posterior approach. 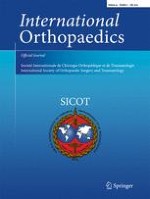 The management of extra-abdominal desmoid tumours