Monitoring of fur-bearing species populations is relatively rare due to their low densities. In addition to catch data, trappers’ experience provides information on the ecology and status of the harvested species. Fisher (Pekania pennanti) and American marten (Martes americana) are mustelids that are sensitive to forest management and therefore considered to be ecological indicators of forest health. Fisher populations have increased in eastern North America since the early 2000s and this could have resulted in a northeastern extension of the species’ range and increased overlap with marten’s range. Moreover, habitats of both species are subject to natural and anthropogenic disturbances. The objective of this study was to document the knowledge held by local trappers in the northern area of sympatry between fisher and marten to identify factors that could explain variation in populations of the two species and interactions between them.

Forty-one semi-directed interviews with Indigenous and non-Indigenous trappers in the Abitibi-Témiscamingue region of western Quebec (Canada), at the northern limit of the overlapping ranges of the two mustelid species.

Trappers highlighted the lack of exclusivity of marten and fisher to coniferous forests, although marten is more closely associated with them than is fisher. Fisher apparently also takes advantage of open environments, including agroforestry systems. Moreover, climate change increases the frequency of freeze-thaw events that cause the formation of an ice crust on the snow surface, which favors fisher movements. 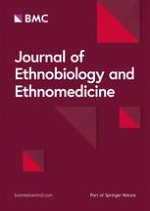 Why they eat, what they eat: patterns of wild edible plants consumption in a tribal area of Western Himalaya

Erratum to: Traditional use and management of NTFPs in Kangchenjunga Landscape: implications for conservation and livelihoods

An ethnobotanical survey of medicinal and edible plants of Yalo Woreda in Afar regional state, Ethiopia

Ethnomedicinal and cultural practices of mammals and birds in the vicinity of river Chenab, Punjab-Pakistan