Although the T1 vertebra is considered as an important factor of cervical balance, little is known about its motion between flexion and extension. The purpose of present study was to analyze the T1 sagittal motion using kinematic magnetic resonance imaging (kMRI), and to identify factors that relate to T1 sagittal motion.

We retrospectively analyzed 145 kMR images taken in weight-bearing neutral, flexion and extension positions. Cervical balance parameters were evaluated in each position. The degree of T1 sagittal motion was defined as [(T1 slope at extension) − (T1 slope at flexion)]. All patients were divided into three groups: Positive group (T1 followed the head motion, T1 sagittal motion > 5°), Stable group (5 ≥, ≥ − 5) and Negative group (T1 moved in the opposite direction from the head motion, > − 5). The groups were compared and multivariate logistic regression analysis was calculated. 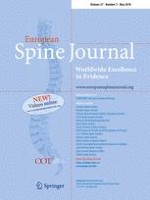 Correction to: A method to quantify the “cone of economy”

Is it statistically significant?

The impact of low back pain on health-related quality of life in old age: results from a survey of a large sample of Swiss elders living in the community