Ulcerative colitis (UC) is a chronic relapsing form of inflammatory bowel disease (IBD) characterized by continuous mucosal inflammation in the innermost layers of the colon and rectum. A primary concern of UC is assessment of intestinal inflammation and evaluation of healing with long-term prognosis [ 1]. However, it is a difficult challenge and a major area of interest. Despite success in practice, endoscopic and histopathological examination are invasive, costly and have some complications in use [ 2].
Both mucosal and clinical evaluation are independently essential in ulcerative colitis. Endoscopy may show active mucosal inflammation in absence of clinical manifestations and in the same manner clinical remission is not linked to mucosal cure. Of particular concern is that multiple endoscopic biopsies during clinical remission may increase the risk of UC activity recurrence in the long term. Away from endoscopy, disease severity can be assessed using laboratory investigations and non-invasive radiology [ 3]. However, previous studies offer contradictory findings about effective noninvasive markers for the detection of mucosal activity in UC [ 4, 5].
Anzeige
UC activity have been assessed in different studies using laboratory markers as erythrocyte sedimentation rate (ESR) and C-reactive protein (CRP), with sensitivities and specificities ranging between 50 and 60% [ 6]. Other markers as fecal calprotectin and lactoferrin are more specific and sensitive. However, both of them are costly and not commonly utilized in clinical practice [ 6, 7]. This indicates a need for simply reachable, efficacious and cost-effective biomarkers for proper management of UC.
Previous research has established the existence of a correlation of both neutrophils and blood mononuclear cells with disease activity. Besides, they can predict disease severity in some diseases such as rheumatoid arthritis and acute coronary syndrome [ 8, 9]. Undoubtedly, macrophages and neutrophils are interestingly involved in IBD pathophysiology [ 10]. And during routine clinical visits changes in leukocyte numbers, particularly monocytes, could also be detected early in IBD as biomarkers of inflammation [ 11, 12].
Extensive research has considered neutrophil–lymphocyte ratio (NLR) as a useful biomarker of systemic inflammation [ 13, 14] and prediction of mortality in some diseases as malignancy, including gastrointestinal malignancies [ 15, 16]. According to foregoing studies, the NLR can be considered a new marker for assessment of UC endoscopic activity and severity [ 17, 18].
Besides, in 2015 Cherfane et al. [ 19] observed that elevated absolute monocytic count and low lymphocyte to monocyte ratio (LMR) can predict disease activity in UC patients. Hence, this study aimed to clarify the role of differential leucocytic ratio, NLR, and LMR as a simple, cost-effective and available predictors of disease activity in patients with ulcerative colitis.
Anzeige

This case–control study included eighty patients newly diagnosed as ulcerative colitis. Participants were recruited from the gastroenterology and internal medicine department, Ain Shams University hospital over a period of 2 years (January 2015 to January 2017). We further classified the eighty patients into two groups of forty each based on clinical, laboratory, radiological, endoscopic, and histological findings. Group 1 (40 patients with active disease) and group 2 (40 patients with inactive disease). None of the participants was on medical treatment (e.g. corticosteroids, azathioprine) or had infectious colitis (based on positive stool culture). Patients with any infections, hematological or neoplastic disorders, chronic renal failure, chronic liver or heart diseases or autoimmune diseases were excluded. Another 40 group-matched healthy individuals were recruited for this study and served as a control group. The study protocol was approved by the Research, Ethical Committee of Ain Shams University. All participants did sign an informed written consent.

Total colonoscopy with intubation of terminal ileum was performed and multiple biopsies were taken. The disease was divided according to the site and extent of the colonic involvement as the following according to the Montreal classification: ulcerative proctitis, proctosigmoiditis, left side colitis, extensive colitis (> splenic flexure) and pancolitis. The endoscopic assessment of ulcerative colitis was categorized according to the endoscopic pictures as the following: inactive disease (normal mucosa), mild (erythema, decreased vascular pattern, mild friability), moderate (marked erythema, erosions, marked friability) and severe (spontaneous bleeding, ulcerations, pseudo-polyps). The disease activity of UC was evaluated using Mayo UC score and the disease was considered active if the score was > 2 and in remission if the score was = 0–1 [ 20].

Demographic data and characteristics of the study groups

Laboratory parameters of the study groups

As shown in Table  3, multivariate logistic regression analysis was used to delineate the associations of the WBC, NLR, LMR, CRP, and ESR with active UC. After adjusting for other inflammatory markers (WBC, CRP, and ESR), the odds ratio of the NLR was 35.23 (95% confidence interval, (7.54–165.244) and the odds ratio of the LMR was 0.015 (95% confidence interval, (0.002–0.104). The multivariable analysis revealed that NLR, could be a parameter capable of discriminating active from inactive UC.
Table 3
Multivariate logistic regression analysis for the relation between NLR and LMR with disease activity of UC as adjusted for possible confounding factors (no. = 80)
CI  confidence interval, ESR erythrocyte sedimentation rate, CRP C-reactive protein; WBC white blood cells, NLR neutrophil–lymphocyte ratio, LMR lymphocyte-monocyte ratio
Anzeige

Correlation of NLR and LMR with other inflammatory markers

Interestingly, NLR and LMR were not only found to be good predictors of disease activity in UC patients, but also, NLR was significantly higher in more extensive and more severe ulcerative colitis while LMR was found to be significantly lower in more extensive ulcerative colitis as set out in Table  6.
Table 6
NLR and LMR in relation to the endoscopic disease activity and the extent of disease

Conception and design: AMO, MMA and AS; endoscopy for patients: AS, AK; collection and assembly of data: OS; data analysis and interpretation: HE, AK, AA; manuscript writing: AMO, MMA and AS. All authors read and approved the final manuscript.

Ethical approval and consent to participate

An informed consent was obtained from all participants. 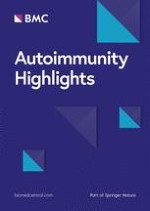