This study was designed to assess real-world outcomes of patients with multiple sclerosis (MS) who were stable on interferon (IFN) beta therapy in the year prior to switching to another IFN beta therapy versus those who continued on the initial treatment. 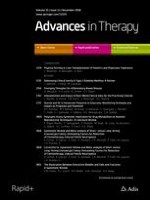 Effect of Azithromycin on Venetoclax Pharmacokinetics in Healthy Volunteers: Implications for Dosing Venetoclax with P-gp Inhibitors

Compliance with Guidelines on Thromboprophylaxis for Acutely Admitted Medical Patients

Evaluation of the Responsiveness of the SarQoL® Questionnaire, a Patient-Reported Outcome Measure Specific to Sarcopenia