This retrospective cohort study included surgically treated trauma patients with tibial plateau fractures, who underwent rehabilitation according to PWB or RWB between 2005 and 2015. Data such as demographics, patient-reported quality of life and pain, and patient outcome were collected.

PWB after surgically treated tibial plateau fractures is safe and is related to a significantly reduced time to full weight bearing with no significant differences in patient-reported quality of life and pain or complication rates. 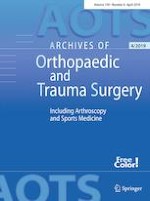 Surgical excision and not chemotherapy is the most powerful modality in treating synovial sarcoma: the UK’s North East experience

Pathoanatomy of Maisonneuve fracture based on radiologic and CT examination