Patient Satisfaction with Clinicians and Short-Term Mortality in a US National Sample: the Roles of Morbidity and Gender | springermedizin.de Skip to main content
TOOLBAR 1 2 3 4
SUCHE MENÜ 1 2 3 4

In a prior study, we found patient satisfaction was associated with mortality. However, that study included few deaths, yielding wide confidence intervals, was criticized for possible morbidity under-adjustment, and lacked power to explore sociodemographic moderation.

The association of higher patient satisfaction with clinicians with higher short-term mortality was evident only after CAHPS-recommended adjustment, was not attenuated by further morbidity adjustment, and was evident in women but not men. The findings suggest that characteristics among women who are more satisfied with their clinicians may be associated with increased mortality risk. 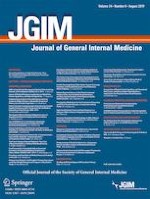 Preventing Diabetes in High-Risk Patients: Time for a System-Level Approach to Disease Prevention

Food Insecurity Is Associated with an Increased Prevalence of Comorbid Medical Conditions in Obese Adults: NHANES 2007–2014

Substance Use by Adults with Medical Multimorbidity in the United States, 2015–2016