This study analyzed the outcomes of the combination of azacitidine and low-dose cytarabine in patients newly diagnosed with refractory anemia with excess blast (RAEB). Patients were treated with azacitidine 75 mg/m2 for 7 days subcutaneously and cytarabine 20 mg/m2 intravenously for 7 days every 28 days. The assigned regimen was repeated for two cycles, then the patients treated with azacytidine alone until progression or allogeneic stem cell transplantation (allo-SCT). Eighteen patients with 5 RAEB-1 and 13 RAEB-2 were enrolled in the current study. After two cycles of the combination therapy, responses were achieved in nine patients (50.0%): four complete response (CR) (22.2%), one partial response (5.6%), two marrow-CR (11.1%), and two hematologic improvement (11.1%). Four patients (22.2%) progressed to acute leukemia during two cycles of the combination therapy. The 1-year overall survival (OS) was 87.5% for the early response group (responses at two cycles) and 0% for the late response group (responses at four cycles, p = 0.042). Plus, the median survival time was 476 days (range, 37–718 days) for the early response group and 221 days (range, 193–249 days) for the late response group. The 1-year OS was 100% for the patients who underwent allo-SCT and 73.4% for those without allo-SCT. In summary, the combination therapy showed promising response rate when compared to treatment with azacitidine alone. However, it was limited in terms of preventing leukemic transformation. Allo-SCT would seem to be the only available treatment that can alter disease progression. 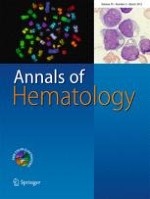 Is obesity a prognostic factor for acute myeloid leukemia outcome?