Hip fractures are common in elderly people. Despite great progress in surgical care, the outcomes of these patients remain disappointing. This study determined pre-fracture hospital admission as a prognostic variable for inferior functional outcomes and increased mortality rates in the perioperative phase and in the first postoperative year.

The influence of a pre-fracture hospitalization on outcomes in hip fracture patients has not yet been investigated.

Four hundred two patients who were surgically treated for hip fracture were prospectively enrolled. Patients with a hospital stay within the last 3 months prior to a hip fracture were compared to patients without a pre-fracture hospitalization. Postoperative functional outcomes and mortality rates were compared between groups at the time of hospital discharge and additionally at the six- and twelve-month follow-up appointments. A multivariate regression analysis was performed.

Hip fracture patients with a recent pre-fracture hospital admission are at a substantial risk for inferior functional outcomes and increased mortality rates not only in the perioperative phase but also in the first postoperative year. As a simple dichotomous variable, pre-fracture hospitalization might be a suitable tool for future geriatric hip fracture screening instruments. 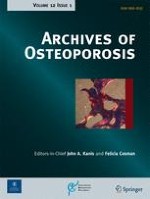 Investigation and analysis of osteoporosis, falls, and fragility fractures in elderly people in the Beijing area: a study on the bone health status of elderly people ≥ 80 years old with life self-care

Pregnancy-associated transient osteoporosis of the hip: results of a case-control study

The impact of comorbidities on hip fracture mortality: a retrospective population-based cohort study

Evaluation of the validity of osteoporosis and fracture risk assessment tools (IOF One Minute Test, SCORE, and FRAX) in postmenopausal Palestinian women

Evaluation of clinical risk factors for osteoporosis and applicability of the FRAX tool in Joinville City, Southern Brazil