Often PIRADS 3 findings are usually followed up with further MRIs of the prostate. Current guidelines do not state an optimal interval between the initial MRI and the follow-up MRI. The aim of this study was to find out if PIRADS 3 lesions evolve over time and to determine how long the optimal interval between initial MRI and follow-ups should be.

In this retrospective study, 141 consecutive patients were included who underwent at least one follow-up MRI after an initial PIRADS 3 finding. Changes in PIRADS score and the interval between the first and the follow-up MRI were recorded. An optimal duration was calculated.

Performing follow-up mpMRI rather than immediate biopsy may be beneficial for patients with PIRADS 3, as most lesions can be reclassified after a manageable period of time. Upgrades to PIRADS 4 seem to happen earlier and within fewer follow-ups than downgrades to PIRADS 2. The optimal interval for follow-up MRIs seems to be 12.4 months. 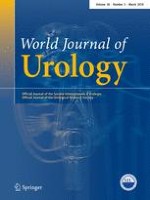 Letter to the Editor: A prospective, randomized trial comparing thulium vapoenucleation with holmium laser enucleation of the prostate for the treatment of symptomatic benign prostatic obstruction: perioperative safety and efficacy

Prognostic factors in patients with penile cancer after surgical management

The role of PSMA PET scans in salvage therapy planning

Safety and efficacy using a low-powered holmium laser for enucleation of the prostate (HoLEP): 12-month results from a prospective low-power HoLEP series

The stone surgeon in the mirror: how are German-speaking urologists treating large renal stones today?