To define the role of surgery for metastatic/recurrent lesions after resection of primary gastrointestinal stromal tumors (GISTs).

Based on data obtained from the Kinki GIST registry, patients with recurrence or metastasis were divided into a surgical treatment group (ST group), comprised those treated with surgery in addition to tyrosine kinase inhibitor (TKI) therapy; and a drug treatment group (DT group), comprised those treated with TKI therapy alone. We compared the baseline characteristics and survival outcomes of the groups.

Continuous TKI therapy appears to be important primarily for the prognostic improvement of patients with recurrent/metastatic GISTs. R0/R1 resection may have benefits when combined with TKI therapy for patients with stable disease or disease responsive to TKI therapy, less than four metastatic lesions, and lesions <100 mm in total. 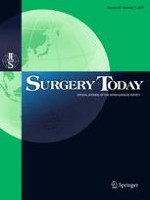 Duodenal-jejunal bypass changes the composition of the gut microbiota

Anatomy of the middle rectal artery: a review of the historical literature