Anemia of dialysis-dependent (DD) CKD is associated with reduced quality of life and increased risk of hospitalization and mortality [ 1, 2]. Anemia of DD CKD is commonly treated with erythropoiesis-stimulating agents (ESAs), alongside oral or intravenous (IV) iron supplementation; however, approximately 12% of patients with anemia of DD CKD do not respond adequately to ESAs [ 3, 4], thereby necessitating the use of higher doses to achieve the recommended hemoglobin (Hb) target [ 5, 6]. Several analyses have suggested that higher ESA doses were associated with increased cardiovascular risk in some patients with CKD [ 7‐ 9].
Anzeige
Roxadustat is an orally administered hypoxia-inducible factor (HIF) prolyl hydroxylase inhibitor in development for the treatment of anemia of CKD. HIF is an oxygen-sensitive transcription factor that regulates erythropoiesis by increasing endogenous erythropoietin production to near physiologic levels, decreasing hepcidin, thus promoting iron absorption and mobilization. In the presence of normal oxygen levels, HIF prolyl hydroxylase enzyme activity results in HIF-α degradation. During hypoxia, the enzyme is inactive, allowing the dimerization of HIF-α with HIF-β, leading to increased expression of erythropoietin, transferrin, and transferrin receptor, as well as increased iron absorption and mobilization from the reticuloendothelial systems (spleen, liver, and bone marrow). Similar to epoetin alfa and darbepoetin alfa (DA), HIF prolyl hydroxylase inhibitors stimulate an erythropoietic response by increasing erythropoietin. In addition, HIF prolyl hydroxylase inhibitors regulate iron metabolism and stimulate transcription of genes involved in the body’s natural response to hypoxia in the presence of normal cellular oxygen levels [ 1, 10].
Roxadustat is approved in Chile, China, the European Union (EU), Japan, and South Korea for the treatment of patients with anemia in DD and non-dialysis-dependent (NDD) CKD. Global phase 3 studies have demonstrated the efficacy and safety of roxadustat in achieving and maintaining Hb target levels in patients with DD [ 11‐ 13] and NDD [ 14, 15] CKD (NCT02964936; EudraCT numbers 2012-005180-27 and 2013-000951-42).
This phase 3 study evaluated the efficacy and safety of roxadustat compared with ESA (epoetin alfa or DA) in the maintenance treatment of anemia in patients with end-stage kidney disease (ESKD) on stable (prevalent) dialysis for at least 4 months who were receiving stable doses of either epoetin alfa or DA for the treatment of anemia. Since this is the first large study of roxadustat conducted in a mainly European population on dialysis for at least 4 months, its findings can contribute to an understanding of the consistency of response to roxadustat across CKD progression and in various geographic regions.

This was a phase 3, multicenter, randomized, open-label, active-controlled study (EudraCT number 2013-001497-16) conducted at approximately 150 sites in 17 countries, mostly in Europe, between November 2014 and July 2018. After a screening period (at most 6 weeks), eligible patients were randomized (1:1) on day 1 of the treatment period to switch from their previous ESA treatment (any short-acting epoetin or DA) to oral roxadustat therapy (roxadustat group) or to continue with their previous IV or subcutaneous (SC) treatment with DA or epoetin alfa (i.e., switch to epoetin alfa if they were previously treated with any short-acting epoetin) at approximately the same average weekly dose and per the same route used prior to randomization (ESA group). Treatment started on day 1 and lasted from 52 weeks for up to 104 weeks. During a 4-week follow-up period, the choice of anemia treatment was at the discretion of the investigator (Fig.  1). Patients who prematurely discontinued study treatment completed the end of treatment (EOT) visits (EOT visit and EOT + 2 weeks visit) and end of study (EOS) visit. Thereafter, patients who took at least one dose of study treatment were followed-up every 6 months for vital status, serious adverse events (SAEs), and cardiovascular and thromboembolic adverse events until their projected date of completion of the follow-up period (i.e., projected EOS visit) or until consent was withdrawn.
×
Anzeige
Two amendments were introduced in the study protocol to align with the global clinical development program of roxadustat (Supplemental Methods).
This study was conducted in accordance with the ethical principles of the Declaration of Helsinki, Good Clinical Practice, the International Committee on Harmonisation guidelines, and applicable laws and regulations. The protocol was approved by each institutional review board and all subjects provided written informed consent.

Patients were aged at least 18 years; on hemodialysis (HD) or peritoneal dialysis (PD) for at least 4 months; had been treated with stable doses of epoetin or DA for at least 8 weeks; had mean Hb values within 9.5–12.0 g/dL, with an absolute difference no greater than 1.3 g/dL between the highest and the lowest value during the screening period; and were iron replete (ferritin ≥ 100 ng/mL and transferrin saturation [TSAT] ≥ 20% at screening). The full list of inclusion and exclusion criteria is reported in the Supplemental Methods.

A block randomization schedule was used to randomize patients via an interactive response system (IRS) to receive roxadustat or ESA (epoetin alfa or DA) according to five stratification factors (previous ESA treatment [epoetin versus DA]; geographic region; history of cardiovascular, cerebrovascular, or thromboembolic diseases; average weekly ESA dose prior to randomization; and Hb value at screening). Each participating site was given the randomization number that was available in sequential order through the IRS. Patients were then enrolled by the investigators of each participating site. Assignment to treatment group was also done by the investigators, according to the aforementioned randomization allocation scheme. Roxadustat was supplied as 20-mg, 50-mg, and 100-mg tablets for oral administration three times weekly (TIW). The initial dose of roxadustat was based on the patient’s average weekly dose of epoetin or DA during the 4 weeks prior to randomization in accordance with predefined rules (Supplemental Table S1). In general, dose adjustments for roxadustat were permitted to maintain Hb in the range of 10–12 g/dL every 4 weeks, starting from week 4, and were conducted in accordance with prespecified rules (Supplemental Tables S2 and S3).
Epoetin alfa and DA were provided, as a solution, for SC or IV injection. The initial dose and frequency of ESA administration were at the investigator’s discretion, provided that the average weekly dose remained approximately the same as the one prior to randomization. Dose adjustments to maintain Hb in the range of 10–12 g/dL were permitted and were conducted in accordance with the European Union (EU) or UK Summary of Product Characteristics of DA and epoetin alfa, respectively.

In the PPS, the least squares mean (LSM; 95% CI) Hb change from baseline to weeks 28–36 was 0.428 (0.350, 0.506) g/dL in the roxadustat group and 0.193 (0.117, 0.268) g/dL in the ESA group. The LSM (95% CI) of the difference between roxadustat and ESA was 0.235 (0.132, 0.339) g/dL, and since the lower bound of the 95% CI was higher than − 0.75 g/dL, non-inferiority of roxadustat versus ESA was declared for the change in Hb levels from baseline to the average of weeks 28–36 (without rescue therapy) (Table  4). Upon study completion, the prespecified subset population was 0.9757 (764/783), which leads to a one-sided significance level of 0.02177 using Bonferroni-based chain procedure. The P values for testing both the total study population and the subset (results are not presented for subset) were both below 0.001, indicating noninferiority of roxadustat in both populations. Similar results were found in the subgroups of patients previously treated with DA or epoetin (Supplemental Table S7). A consistent treatment effect was shown across all subgroup analyses, defined by the categorical variables of age; sex; region; baseline Hb; dialysis type; history of cardiovascular, cerebrovascular, or thromboembolic diseases; and baseline high-sensitivity C-reactive protein.
Table 4
Statistical analysis of change in Hb levels from baseline to the average of weeks 28–36 without rescue therapy (per protocol set)
Data are reported as mean (standard deviation) unless otherwise indicated
BL baseline, CI confidence interval, ESA erythropoiesis-stimulating agent, Hb hemoglobin, LSM least squares mean
Mean Hb concentrations from baseline to week 52 and changes from baseline at each visit are shown in Fig.  3 and Supplemental Fig. S4, respectively.
×

Overall, this study shows that roxadustat is non-inferior to ESAs (epoetin alfa and DA) in maintaining Hb levels within 10.0–12.0 g/dL for up to 104 weeks in dialyzed patients with anemia of CKD who were previously treated with ESAs. The effects of roxadustat and ESAs on HRQoL were comparable. In general, the types of TEAEs observed in this study are in line with previous studies.

We thank the participants of the study.

This study and publication fees were funded by Astellas Pharma, Inc.

Medical Writing, Editorial, and Other Assistance

Results from this study were presented at the American Society of Nephrology Kidney Week on November 9, 2019 (Abstract: SA-PO225).

This study was conducted in accordance with the ethical principles of the Declaration of Helsinki, Good Clinical Practice, the International Committee on Harmonisation guidelines, and applicable laws and regulations. The protocol was approved by each institutional review board and all subjects provided written informed consent.

Researchers may request access to anonymized participant level data, trial level data and protocols from Astellas sponsored clinical trials at  www.​clinicalstudydat​arequest.​com. For the Astellas criteria on data sharing see: https://​clinicalstudydat​arequest.​com/​Study-Sponsors/​Study-Sponsors-Astellas.​aspx.
Open AccessThis article is licensed under a Creative Commons Attribution-NonCommercial 4.0 International License, which permits any non-commercial use, sharing, adaptation, distribution and reproduction in any medium or format, as long as you give appropriate credit to the original author(s) and the source, provide a link to the Creative Commons licence, and indicate if changes were made. The images or other third party material in this article are included in the article's Creative Commons licence, unless indicated otherwise in a credit line to the material. If material is not included in the article's Creative Commons licence and your intended use is not permitted by statutory regulation or exceeds the permitted use, you will need to obtain permission directly from the copyright holder. To view a copy of this licence, visit http://​creativecommons.​org/​licenses/​by-nc/​4.​0/​.

Below is the link to the electronic supplementary material.
Supplementary file1 (PDF 694 KB) 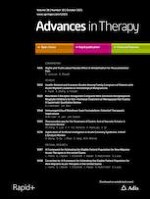 Healthcare Resource Use in Patients with Immune-Mediated Conditions Treated with Targeted Immunomodulators During COVID-19 Pandemic: A Retrospective Claims Analysis

Correction to: Evaluating the Impact and Benefits of Fluticasone Furoate/Vilanterol in Individuals with Asthma or COPD: A Mixed-Methods Analysis of Patient Experiences

Pharmacotherapy for the Treatment of Gastric Antral Vascular Ectasia: A Narrative Review

Psychometric Validation of the Psoriasis Symptoms and Impacts Measure (P-SIM): A Novel Patient-Reported Outcome Instrument for Patients with Plaque Psoriasis, Using Reported Data from the BE RADIANT Phase 3b Trial