This study aims to determine if (1) loss of lumbar lordosis (LL), often associated with degenerative scoliosis (DS), is structural or rather largely due to positional factors secondary to spinal stenosis; (2) only addressing the symptomatic levels with a decompression and posterolateral fusion in carefully selected patients will result in improvement of sagittal malalignment; and (3) degree of sagittal plane correction achieved with such a local fusion could be predicted by routine pre-operative imaging.

A retrospective study design with prospectively collected imaging data of a consecutive series of surgically treated DS patients who underwent decompression and instrumented fusion at only symptomatic levels was performed. Pre- and post-operative plain radiographs and pre-operative magnetic resonance imaging (MRIs) of the spinopelvic region were analyzed. LL, pelvic incidence (PI), pelvic tilt (PT), and sacral slope (SS) were assessed in all patients. As a requirement for the surgical strategy, all patients presented with a pre-operative PI-LL mismatch greater than 10°. Post-operative complications were assessed. 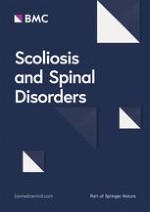 The association of high-intensity zones on MRI and low back pain: a systematic review