The aim of this study was to investigate sensitivity and specificity of self-administrated tests aimed at pain provocation of posterior and/or anterior pelvis pain and to investigate pain intensity during and after palpation of the symphysis. A total of 175 women participated in the study, 100 pregnant women with and 25 pregnant women without lumbopelvic back pain and 50 non-pregnant women. Standard pain provocation tests were compared with self assessed tests. All women were asked to estimate pain during and after palpation of the symphysis. For posterior pelvic pain, the self-test of P4 and Bridging test had the highest sensitivity of 0.90 versus 0.97 and specificity of 0.92 and 0.87. Highest sensitivity for self-test for anterior pelvic pain was pulling a mat 0.85. Palpation of symphysis was painful and persistency of pain was the longest among women who fulfilled the criteria for symphyseal pain. There were overall significant differences between the groups concerning intensity and persistency of pain (P < 0.001). Our results indicate that pregnant women can perform a screening by provocation of posterior pelvic pain by self-tests with the new P4 self-test and the Bridging test. Palpation of the symphysis is painful and should only be used as a complement to history taking, pain drawing and pulling a MAT-test. 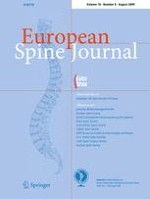 Answer to the Letter to the Editor of A.T. Turgut et al. concerning “Intradural extramedullary primary hydatid cyst of the spine in a child: a very rare presentation”

Surgery of a Klippel–Feil malformation of the cervicothoracic junction

Sacroplasty in a cadaveric trial: comparison of CT and fluoroscopic guidance with and without balloon assistance