The online version of this article (https://​doi.​org/​10.​1007/​s00264-018-3985-9) contains supplementary material, which is available to authorized users.
Yanbin Zhu and Song Liu contributed equally to this work.

We aimed to do a national survey on the population-based incidence of patella fractures and related risk factors fracture in China.

All the data on patella fractures were available from the China National Fracture Survey (CNFS) between January and May in 2015. And in the CNFS, all eligible household members were selected from 24 urban cities and 24 rural counties of eight provinces of China, with stratified random sampling and the probability proportional to size method used. Questionnaire was sent to every participant for data collection and quality control was accomplished by our research team members.

A total of 512,187 valid questionnaires were collected, and relevant data were abstracted. There were a total of 69 patients with 69 patella fractures that occurred in 2014, indicating that the incidence was 13.5 (95% CI, 10.3–16.7))/100,000 person-years. Slip, trip, or fall from standing height was the most common cause, leading to 69.6% (48/69) of patella factures, followed by traffic accidents (18.8%, 13/69). Home and road were the first two most common places, where 86.9% of the overall injuries occurred. Age of 45–64 and 65–74 years, alcohol consumption and previous history of fractures were identified as independent risk factors for patella fracture.

Specific public health policies focusing on decreasing alcohol consumption should be implemented. Individuals aged 45–64 and 65–74 should pay more attention to bone mass density and prevention of falls, especially those with previous history of fracture. 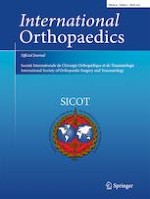 The correlation of sagittal osteotomy inclination and the anteroposterior translation in medial open-wedge high tibial osteotomy—one of the causes affecting the patellofemoral joint?