The impact of multi-morbidity on disability among older adults in South Africa: do hypertension and socio-demographic characteristics matter? | springermedizin.de Skip to main content
TOOLBAR 1 2 3 4
SUCHE MENÜ 1 2 3 4

Alongside the global population ageing phenomenon, there has been a rise in the number of individuals who suffer from multiple chronic conditions. Taking the case of South Africa, this study aims, first, to investigate the association between multi-morbidity and disability among older adults; and second, to examine whether hypertension (both diagnosed and undiagnosed) mediates this relationship. Lastly, we consider whether the impact of the multi-morbidity on disability varies by socio-demographic characteristics.

Data were drawn from Wave 1 (2007–08) of the South African Study on Global Ageing and Adult Health. Disability was measured using the 12-item World Health Organisation Disability Assessment Schedule (WHODAS) 2.0. Scores were transformed into a binary variable whereby those over the 90th percentile were classified as having a severe disability. The measure of multi-morbidity was based on a simple count of self-reported diagnosis of selected chronic conditions. Self-reports of diagnosed hypertension, in addition to blood pressure measurements at the time of interview, were used to create a three category hypertension variable: no hypertension (diagnosed or measured), diagnosed hypertension, hypertension not diagnosed but hypertensive measured blood pressure. Interactions between the number of chronic diseases with sex, ethnicity and wealth were tested. Logistic regression was used to analyze the relationships.

25.4% of the final sample had one and 13.2% two or more chronic diseases. Nearly half of the respondents had a hypertensive blood pressure when measured during the interview, but had not been previously diagnosed. A further third self-reported they had been told by a health professional they had hypertension. The logistic regression showed in comparison to those with no chronic conditions, those with one or two or more had significantly higher odds of severe disability. Hypertension was insignificant and did not change the direction or size of the effect of the multi-morbidity measure substantially. The interactions between number of chronic conditions with wealth were significant at the 5% level. 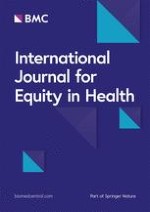 Patients’ willingness to pay for the treatment of tuberculosis in Nigeria: exploring own use and altruism

Socio-economic factors linked with mental health during the recession: a multilevel analysis

Strengthening health system to improve immunization for migrants in China

Assessing equity in the distribution of high-technology medical equipment in Guangxi: evidence from an ethnic minority region in Southern China