Grading inter-vertebral disc degeneration (IDD) is important in the evaluation of many degenerative conditions, including patients with low back pain. Magnetic resonance imaging (MRI) is considered the best imaging instrument to evaluate IDD. The Pfirrmann classification is commonly used to grade IDD; the authors describing this classification showed an adequate agreement using it; however, there has been a paucity of independent agreement studies using this grading system. The aim of this study was to perform an independent inter- and intra-observer agreement study using the Pfirrmann classification.

T2-weighted sagittal images of 79 patients consecutively studied with lumbar spine MRI were classified using the Pfirrmann grading system by six evaluators (three spine surgeons and three radiologists). After a 6-week interval, the 79 cases were presented to the same evaluators in a random sequence for repeat evaluation. The intra-class correlation coefficient (ICC) and the weighted kappa (wκ) were used to determine the inter- and intra-observer agreement.

In this independent study, the Pfirrmann classification demonstrated an adequate agreement among different observers and by the same observer on separate occasions. Furthermore, it allows communication between radiologists and spine surgeons. 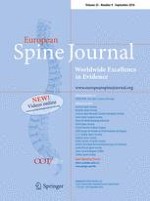 Chronic low back pain in relation to Modic changes, bony endplate lesions, and disc degeneration in a prospective MRI study