We included 7949 subjects from the Swedish Longitudinal Occupational Survey of Health, who completed questionnaires of perceived job demands and control, and depressive symptoms from 2006 to 2014. None of them were depressed between 2006 and 2012. Univariate and joint group-based trajectory models identified groups with similar development of demands and control across 2006–2012. Logistic regression estimated the risk for symptoms of major depression in 2014 according to joint trajectory groups.

The joint trajectory model included seven groups, all with fairly stable levels of demands and control over time. Subjects in the high strain and active (high demands and high control) trajectories were significantly more likely to have subsequent major depressive symptoms compared to those having low strain, controlling for demographic covariates (OR 2.15; 95% Cl 1.24–3.74 and OR 2.04; 95% CI 1.23–3.40, respectively). The associations did not remain statistically significant after adjusting for previous depressive symptoms in addition to demographic covariates.

The results indicate that the levels of job demands and control were relatively unchanged across 6 years and suggest that long-term exposure to a high strain or active job may be associated with increased risk for subsequent depression. 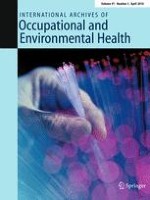 Acceptance and barriers to access of occupational e-mental health: cross-sectional findings from a health-risk population of employees

The role of managers in addressing employees with musculoskeletal pain: a mixed methods study