A 78-year-old man had received interferon therapy and achieved sustained virologic response for chronic hepatitis C 10 years before. He came to our hospital due to liver damage. Abdominal ultrasonography showed a 90-mm mass lesion in the liver. The echoic level was high in the central part and low in the edge of the tumor. Moreover, there was an accumulation of low echoic irregular mass lesions around the hepatic portal region. Cervical ultrasonography also revealed several 15-mm mass lesions on the left clavicle, the imaging character of which was similar to the liver tumor. The liver tumor seemed to be hypovascular on dynamic computed tomography, but contrast-enhanced ultrasonography showed hyperenhancement at the early vascular phase and at maximum intensity projection showed a treelike branch vascular structure that derived from the central part to the margin of the mass. A needle biopsy of the liver tumor and a cervical lymph node resection were performed, which led to the definitive diagnosis of undifferentiated carcinoma of the liver with multiple lymph node metastasis, upon histological analysis. Undifferentiated carcinoma of the liver is extremely rare and contrast-enhanced ultrasonography was the most useful device for evaluating vascular characteristics in this case. 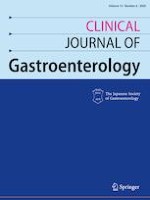