This survey was partially supported by the Pfizer Health Research Foundation.

MMu designed the study. In the first stage, MMu and HK conducted interviews, and analysed preliminary data. MMa, the senior researcher, supervised all analyses, and all three authors discussed, revised, and approved the final result. In the second stage, all three authors cooperated closely in the planning of the workshop. MMu is the guarantor of this manuscript. All authors read and approved the final manuscript.

Community based education (CBE), defined as “a means of achieving educational relevance to community needs and, consequently, of implementing a community oriented educational program,” is reported to be useful for producing rural physicians in Western countries. However, why some physicians withdraw from their teaching roles is not well known, especially in Asian countries. The aim of this study was to clarify the requisites and obstacles for taking part in CBE.

We combined two steps: preliminary semi-structured interviews followed by workshop discussions. First of all, we interviewed four designated physicians (all male, mean age 48 years) working in one rural area of Japan, with less than 10,000 residents. Secondly, we held a workshop at the academic conference of the Japan Primary Care Association. Fourteen participants attending the workshop (seven male physicians, mean age 45 years, and seven medical students (one female and six male), mean age 24 years) were divided into two groups and their opinions were summarized. 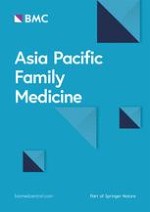 Subjects with colour vision deficiency in the community: what do primary care physicians need to know?

Assessing physical activity in daily life, exercise, and sedentary behavior among Japanese moving to westernized environment: a cross-sectional study of Japanese migrants at an urban primary care center in Pittsburgh

A descriptive study of knowledge, beliefs and practices regarding osteoporosis among female medical school entrants in Sri Lanka

Factors associated to the career choice of family medicine among Japanese physicians: the dawn of a new era

A cross-sectional study of the differences in diabetes knowledge, attitudes, perceptions and self-care practices as related to assessment of chronic illness care among people with diabetes consulting in a family physician-led hospital-based first line health service and local government health unit-based health centers in the Philippines