In this study (AMD2000), we aimed to determine the visual prognosis of Japanese patients with age-related macular degeneration (AMD).

This was a multicenter prospective observational cohort study. In total, 460 patients with AMD were recruited from April 2006 to March 2009 from 18 clinical trial sites in Japan. They were followed up for 5 years, as they continued to receive medical treatment.

Maintaining the baseline BCVA over the long term is difficult in Japanese eyes with wet AMD. 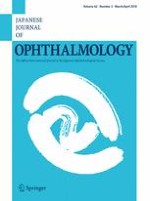