We report a rare case of diabetic mastopathy in man with type 2 diabetes. The patient was a 64-year-old man who had suffered from type 2 diabetes for 18 years. He had poor glycemic control, and also had retinopathy and nephropathy. Seven years ago, he had undergone a mastectomy on the left side because of a breast mass. However, pathogenesis of the resected mass was not known. He developed a hard and mobile mass (diameter 4 cm) under the nipple of his right breast and complained of slight pain. Mammography revealed a dense mass without calcification, and ultrasonography revealed a hypoechoic lesion with unclear boundaries, acoustic shadows, and Doppler color flow. When a core needle aspiration biopsy was performed to exclude breast cancer the mass was diagnosed as diabetic mastopathy. As far as we know, this was the second case of diabetic mastopathy involving a man to occur in Japan. 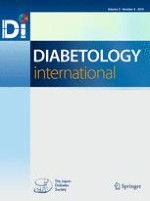 Report of the committee