Adherence to the guidelines and the pathological diagnosis of high-risk gastrointestinal stromal tumors in the real world | springermedizin.de Skip to main content
TOOLBAR 1 2 3 4
SUCHE MENÜ 1 2 3 4

The online version of this article (https://​doi.​org/​10.​1007/​s10120-019-00966-4) contains supplementary material, which is available to authorized users.
The list of hospitals and representative investigators is shown in Supplemental Table 5.

Rare cancers present several challenges, including delays in the diagnosis and the administration of treatments that are not always based on the guidelines used in clinical practice [ 1]. Furthermore, there is significant discordance in the pathological diagnosis of rare cancers between disease-specific pathologists and general pathologists, which rarely occurs for common cancers [ 2]. Soft tissue sarcoma is a typical rare cancer with a wide variety of histological subtypes originating from connective tissue, bone, and viscera. In sarcoma, major discordance rates of 10–20% in the pathological diagnosis between disease-specific and general pathologists has been reported, and a rate of minor pathological discrepancies, such as different grading, of 20% has been reported [ 3- 5]. Gastrointestinal stromal tumors (GISTs) are soft tissue sarcomas with established diagnostic criteria based on KIT and DOG1 immunostaining and genotyping [ 6- 8]. The established treatment for GISTs is imatinib, sunitinib or regorafenib after the discovery of driver mutations in the KIT or PDGFRA gene [ 9]. These facts may indicate that GISTs might differ from other soft tissue sarcomas in terms of the pathological diagnosis and in clinical practice; however, the concordance of the pathological diagnosis of GISTs in the real world is still unknown, and factors related to this pathological discordance have yet to be investigated.
Diagnosis and treatment based on guidelines and sharing the treatment decision with patients under the supervision of a multidisciplinary team are suggested to improve the quality of life (QoL) and prognosis of patients [ 10]. The first clinical practice guidelines for GISTs were published by the National Comprehensive Cancer Network (NCCN) in 2004 [ 6], followed by guidelines published by the European Society for Medical Oncology (ESMO) [ 7], and they have been revised along with the development of innovative medicine. With an increase in the amount of established clinical evidence, each country, including Japan [ 8], has its own clinical practice guidelines for GISTs. Although many GIST guidelines have been published and revised several times, there are few reports on the clinical use and adherence to the guidelines in clinical practice [ 11- 13]. We prospectively registered patients with high-risk GISTs diagnosed in local hospitals and institutions. Using data obtained from the registry study, we examined the concordance of pathological diagnoses, measured the discordance between the guidelines and clinical practice in terms of adjuvant therapy in the treatment of high-risk GISTs, and investigated potential causes of the discordance.
Anzeige

Between Dec. 2012 and Dec. 2015, a total of 541 patients with high-risk GISTs who were pathologically diagnosed and treated in each participating hospital were recruited to participate in the prospective observational registry study (STAR ReGISTry) (Supplemental Fig. 1). The modified National Institutes of Health (NIH) consensus criteria were used for risk stratification in this study [ 14]. As two patients were later revealed to have intermediate-risk GISTs by the local diagnosis, one tumor was a recurrent tumor, and one registration was a duplicate, a total of 537 patients were eligible for registration. In our STAR ReGISTry, we also collected surgical specimens for the central pathology and genotyping of the KIT and PDGFRA genes conducted by one of the authors. In the central pathology, a disease-specific pathologist reviewed all materials and data of hematoxylin and eosin staining, immunohistochemistry staining, and genotyping using obtained surgical specimens. Among the 537 patients, central pathology and genotyping findings were available for 534 patients, as three patients lacked specimens (Supplemental Fig. 1). Ethical approval for the study was initially obtained from the institutional review board (IRB) of the National Cancer Center and then from those of the other participating hospitals. Signed informed consent was obtained from all participating patients. This trial is registered with the UMIN Clinical Trials Registry, number UMIN000009531.
In the central pathological examinations, hematoxylin and eosin (H&E) staining and immunohistochemistry (IHC) for KIT, DOG1, CD34 and Ki67 were performed as previously described [ 9, 15]. The Ki-67 labeling index was calculated as a percentage of Ki-67-positive tumor cells to all tumor cells in approximately 1000 cells of the hot spot. Since the field number of the microscope used in the central review was 26.5, 50 high-power fields (HPFs) corresponded to 17.235 mm 2. Genotyping was performed after the extraction of genomic DNA from the paraffin sections using the QIAamp DNA Mini Kit (QIAGEN, Hilden, Germany); exons 9, 11, 13, and 17 of the KIT gene and exons 12, 14, and 18 of the PDGFRA gene were amplified by PCR and sequenced as described elsewhere [ 9, 15].
In this research, we also conducted a questionnaire survey in each participating hospital as research accompanying the STAR ReGISTry. The study was approved by the IRB of the Osaka Police Hospital and the National Cancer Center. These studies were conducted in accordance with the World Medical Association Declaration of Helsinki, Ethical Principles for Medical Research Involving Human Subjects (Amended in Seoul in October 2008) and the Ethics Guidelines for Clinical Research (Ministry of Health, Labour and Welfare Notice no. 415, 2008).

The demographics and baseline characteristics of the patients with and without adjuvant therapy were compared, and differences were tested using the Chi-squared test or the Mann–Whitney U test to identify risk factors associated with non-adherence. Multiple logistic regression analysis of the demographics and baseline characteristics as covariates was performed, and variable selection was performed using a stepwise method. The data were analyzed using SAS Version 9.4 (SAS Institute, Inc., Cary, NC, USA). This report is based on baseline data fixed on January 31, 2018.
Anzeige

The enrolled patients included 294 (55%) men and 240 (45%) women, with a median age of 65 years. GISTs were located in the stomach ( N = 318; 60%), small intestine (163; 31%), colon and rectum (32; 6%), esophagus (7; 1%) and extragastrointestinal tissues (14; 3%) (Table 1). The median tumor size was 7.5 cm, and the median mitotic count was 10/50 HPFs, as determined by the diagnosis at local hospitals. Tumor rupture, including 33 preoperative ruptures and 29 intraoperative ruptures, was observed in 66 (12%) patients. Histologically, the tumors comprised 446 (84%) spindle cell-type tumors, 17 (3%) epithelioid cell-type tumors and 46 (9%) mixed cell-type tumors. Open surgery was performed in 387 (72%) cases, and laparoscopic surgery was performed in 147 (28%) cases. Clinically significant morbidities due to surgery were observed in 63 patients, and most were less than grade 2 (Supplemental Table 1). No deaths related to surgery occurred.
Table 1
Patients characteristics
Of 534 patients, 432 (81%) received imatinib adjuvant therapy. The starting dose of imatinib was 400 mg/day for 314 patients and 300 mg/day for 77 patients. The other 102 patients did not undergo adjuvant therapy due to a fear of adverse events due to imatinib ( N = 39; 38%), economic reasons (26; 26%), advanced age (20; 20%), patient refusal for unidentifiable reasons (20; 20%), and comorbidities (15; 15%), as shown in Table 2. Some patients and investigators doubted the evidence of improvements in overall survival (OS) due to adjuvant therapy and were concerned about the potential induction of drug resistance by the therapy. Patients without adjuvant therapy were older, exhibited poorer performance statuses (PSs), and more frequently had nongastric GISTs (Table 3). The GISTs of patients with adjuvant therapy were larger, showed a higher mitotic count, and ruptured more frequently than those of patients without adjuvant therapy. Multivariate analysis indicated that age (HR 0.71; 95% CI 0.58–0.88; P = 0.002), tumor size (HR for > 10 cm vs < 5 cm, 3.87; 95% CI 1.72–8.74; P = 0.001), mitotic count (HR for > 10/50 HPFs vs < 5/50, 3.54; 95% CI 1.84–6.79; P < 0.001), tumor rupture (HR 3.69; 95% CI 1.43–9.52; P = 0.007) and PS (HR 0.55; 95% CI 0.31–0.99; P = 0.046) were independent factors of the administration of adjuvant therapy (Supplemental Table 2).
Table 2
Reasons for no adjuvant therapy
Table 3
Clinicopathological features of adjuvant and non-adjuvant patients
Next, we evaluated pathological concordance for high-risk GISTs between local, general pathologists and a central GIST specialist and surveyed the influence of the results of the central pathological examination on treatment changes. Of 534 GISTs that had been locally diagnosed as high-risk GISTs, 19 tumors (3.6%) were diagnosed as non-GISTs in central pathology (Table 4; the pathological features of which are summarized in Supplemental Table 3). The non-GISTs showed unusual locations, including extragastrointestinal locations, negative staining for KIT and DOG1 in the central pathological diagnosis, and no mutations in the KIT and PDGFRA genes (Supplemental Tables 3 and 4). Of 515 centrally certified GISTs, 93 (18.1%) GISTs were reclassified into lower categories due to different mitotic counts in the central pathological diagnosis (Table 4). While the local and central mitotic counts were well correlated, the former were significantly higher than the latter (Supplemental Fig. 2).
Table 4
Concordance between local and central diagnosis
Since the guidelines do not recommend imatinib adjuvant therapy for non-GISTs or for GISTs with PDGFRA D842V mutations, which are considered to be resistant to all available tyrosine kinase inhibitors, including imatinib, we used the questionnaire to examine changes in the clinical practice of local hospitals after receiving the central pathology results (Table 5). Of 19 non-GIST patients in the central pathological diagnosis, 10 patients who were undergoing imatinib adjuvant therapy at the time the results were returned were evaluable. Six patients (60%) stopped imatinib adjuvant therapy, and the other 4 continued the therapy despite being diagnosed as having a non-GIST by central pathology. Similarly, 8 patients with GISTs with PDGFRA D842V mutations were evaluable; 5 (63%) patients stopped adjuvant therapy after the central pathology results were reported, and the other three continued. Central pathological review and genetic analysis results were shared with all patients who have had treatment changes to discontinue adjuvant therapy, however, central reports were not always shared in the other cases. Some of the latter patients had already stopped adjuvant therapy before central reporting due to disease relapses or adverse events. Among patients with wild-type GISTs, all 7 evaluable patients continued imatinib adjuvant therapy after the reporting. However, almost all investigators participating in this study answered that they always refer to the GIST guidelines in their clinical practice and that they treat GIST patients according to the guidelines (Supplemental Table 3).
Table 5
Changes in adjuvant therapy after central pathology
aImatinib adjuvant therapy was already stopped before returning central pathology due to relapses or patients’ refusal of imatinib due to adverse events

The authors are grateful to all participating investigators listed in Supplement Table 5.

Yuko Kitagawa, Toru Masuzawa, Tatsuo Kagimura, and Masakazu Takagi have no COI in terms of Employment, Leadership, Stock and Other Ownership Interests, Honoraria, Consulting or Advisory Role, Speakers’ Bureau, Research Funding, Patents, Royalties, Other Intellectual Property, Expert Testimony, Travel, Accommodations, Expenses and Other Relationship. Toshirou Nishida has been paid Honoraria by Pfizer, Bayer, Eizai, and Taiho. Seiichi Hirota has been paid Honoraria by Novartis and Pfizer. Yoichi Naito has Consulting or Advisory Role for Pfizer, Eisai, Eli Lilly, Chugai, Novartis, and AstraZeneca, Speakers' Bureau of Pfizer, Novartis, Chugai, Eisai, AstraZeneca, Shionogi, Hisamitus, Fuji RI farma, JSMO, and Technical Information Institute, and Research Funding form AstraZeneca, Eli Lilly, Pfizer, Ono, Taiho, CSPOR-BC, and JBCRG. Yukinori Kurokawa has been paid Honoraria by Taiho, Eli Lilly, Yakult Honsha, Ono, MSD, Kaken Pharmaceutical, Medtronic, Johnson & Johnson, and Stryker. Yoshiharu Sakai has Speakers’ Bureau of Taiho, Chugai, Tsumura, Yakult, Sanofi, and MSD, and Research Funding from Taiho, Chugai, Yaklut, and Sanofi. Masato Ozaka has been paid Honoraria by Taiho, Yakult, Novartis, Bayer, Pfizer, and Takeda, and has Research Funding from Baxalta, Taiho, Incyte, and Boston biomedical. The others have no COI to declare.
Open AccessThis article is distributed under the terms of the Creative Commons Attribution 4.0 International License ( http://​creativecommons.​org/​licenses/​by/​4.​0/​), which permits unrestricted use, distribution, and reproduction in any medium, provided you give appropriate credit to the original author(s) and the source, provide a link to the Creative Commons license, and indicate if changes were made. 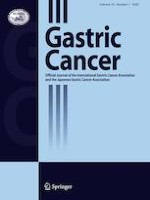 Peritoneal metastasis in gastric cancer: results from the German database

Exploratory subgroup analysis of patients with prior trastuzumab use in the ATTRACTION-2 trial: a randomized phase III clinical trial investigating the efficacy and safety of nivolumab in patients with advanced gastric/gastroesophageal junction cancer