Antegrade pyelography (APG) is a useful modality for imaging the upper urinary tract. Little scientific evidence exists concerning optimal pressure while performing an APG. Methods of implementation seem to vary between hospitals as no specific guideline exists. Our aim was to describe current practice patterns in pre-procedural prophylaxis, describe methods of contrast administration, and estimate rate of complications during APG as reported by urologist, in order to stimulate discussion on defining guidelines.

A digital questionnaire with 16 questions concerning APG was set out among EAU members via an ESUI twitter link. Fifty urologists from different centers responded. Outcomes were use of antibiotics, used pressure in upper urinary tract, and estimated urosepsis prevalence. Percentages and confidence intervals (95% CI) were calculated.

Forty-two percent (95% CI 30–56) of respondents stated that antibiotic prophylaxis was always administered. Fifty-two percent (95% CI 38–65) of urologists sometimes performed a pre-procedural culture. Seventy percent (95% CI 56–81) indicated that administration of contrast during APG was performed using a syringe. A local guideline was only used in 8% of cases (95% CI 2.8–17.9) The self-estimated average percentage of urosepsis as a result of performing an APG was mentioned to be 4% (range 0–20%).

Despite a considerable risk of urosepsis, no guideline or consensus exists on how to perform APG. This is urgently needed in order to prevent complications. Low response rate is a major limitation of these findings. 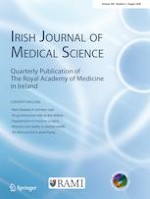 Sponsorship, advertising and alcohol control in Ireland: the importance of both premises and products in regulating intoxigenic environments

Impact of atrial fibrillation on frailty and functionality in older adults