A new method consisting of orthogonal projection to latent structure (OPLS) and modified principal component analysis (PCA) was applied to a screening of bioactive compounds from natural products. In this report, extracts of 52 Scutellaria Root (the root of Scutellaria baicalensis Georgi) samples were analyzed by high-performance liquid chromatography (HPLC), and their inhibitory activities towards prostaglandin E2 (PGE2) production in a murine macrophage-like cell line J774.1 were examined. Wogonin and oroxylin A were predicted to be strong inhibitors of PGE2 production by OPLS analysis of the data. However, 6-methoxywogonin, which has been reported to have inhibitory activity, was omitted. Modified PCA was then applied to these data as a filter to exclude compounds less relevant to the activity, and OPLS analysis was applied to the modified data. As a result, this method predicted wogonin, oroxylin A and 6-methoxywogonin to be strong inhibitors of PGE2 production without any prior knowledge. The predictions by the OPLS combined with PCA method of PGE2 production inhibitory activities of 52 samples showed good agreement with the actual data. This method is simple and effective and can be used in screening of bioactive natural compounds without any prior knowledge. 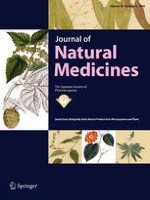