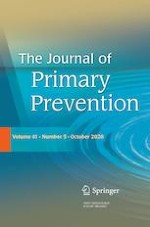 Turning Off the Tap: A Typology for Homelessness Prevention

Health Behavior Change in the Classroom: A Means to a Healthy End?