The online version of this article (doi:10.​1186/​bcr1610) contains supplementary material, which is available to authorized users.

Stem cell theory proposes that cancers arise from malignant transformation of normal stem/progenitor cells [ 1– 4]. The inherent properties of stem/progenitor cells may impart their transformed counterparts with the ability to evade traditional antitumor therapies and to establish metastasis [ 3– 5]. Tumorigenic stem/progenitor cells have been documented in hematologic malignancies as well as in solid tumors [ 6– 8]. Several studies implicated a subset of human breast cancer cells as having enhanced ability to form tumors in immunocompromised mice [ 9, 10]. This subpopulation of cells also demonstrated a capacity for self-renewal and generation of heterogeneous progeny. These cells were distinguished from their nontumorigenic counterparts by a specific cell surface marker profile: the CD44 +/CD24 -/Lineage -. However, the potential of these tumorigenic stem/progenitor cells to establish metastasis is not known.
Metastasis is a complex process that involves not only invasion but also homing and proliferation at sites of metastasis [ 11]. This process requires the activity of several genes, including the urokinase plasminogen activator (UPA)/UPA receptor system, cytokines (IL-1, IL-6, IL-8, IL-11, tumor necrosis factor, and transforming growth factor-β 1), chemokines and their receptors (stromal cell-derived factor-1α and CXC chemokine receptor [CXCR]4), and matrix metalloproteinases (MMPs) [ 12– 14]. Recent microarray analyses of clonal variants of MDA-MB-231 cells that home and grow at metastatic sites such as bone and lung have revealed a distinct gene expression pattern associated with metastasis to these sites [ 14, 15]. Bone metastasis signature genes include CXCR4, connective tissue-derived factor (CTGF), IL-11, the metalloproteinase-disintegrin family member ADAMTS1 (a disintegrin and metalloproteinase with thrombospondin-1) and MMP1, whereas genes of the lung metastasis signature include CXCR4, MMP1 and cyclo-oxygenase-2. A recent study described the role of the receptor activator of nuclear factor-κB (RANK)/RANK ligand in metastasis of breast cancer cells to bone [ 16].
Anzeige
Recent gene expression profiling has challenged the long held view that metastatic cells are rare and arise during later stages of tumor progression as a result of progressive accumulation of mutations. An alternative possibility is that most primary tumors contain a subset of cancer cells that has a 'metastatic phenotype' [ 17– 19]. We investigated whether breast cancer cells with the CD44 +/CD24 - phenotype possess three essential characteristics of cells with metastatic phenotype: expression of invasion/metastasis-associated genes; invasion; and homing and proliferation at sites of metastasis. We show that a subgroup of breast cancer cell lines with a higher percentage of CD44 +/CD24 - cells express higher levels of proinvasive genes and invade matrigel in vitro. However, the CD44 +/CD24 - phenotype is not sufficient for homing and proliferation at sites of metastasis.

Cells were washed once with phosphate-buffered saline (PBS) and then harvested with 0.05% trypsin/0.025% EDTA. Detached cells were washed with PBS containing 1% FCS and 1% penicillin/streptomycin (wash buffer), and resuspended in the wash buffer (10 6 cells/100 μl). Combinations of fluorochrome-conjugated monoclonal antibodies obtained from BD Biosciences (San Diego, CA, USA) against human CD44 (FITC; cat. #555478) and CD24 (PE; cat. #555428) or their respective isotype controls were added to the cell suspension at concentrations recommended by the manufacturer and incubated at 4°C in the dark for 30 to 40 min. The labeled cells were washed in the wash buffer, then fixed in PBS containing 1% paraformaldehyde, and then analyzed on a FACSVantage (BD Biosciences).

The Institutional Animal Care and Use Committee approved all animal studies. For intracardiac injection studies, 10 5 cells were suspended in 100 μl HEPES-buffered saline and slowly injected into the left cardiac ventricle of 7-week-old female nu/nu mice using a 27-gauge needle (7 to 12 animals per cell type), as described previously [ 21]. Animals injected with TMD-231, LMD-231, or MDA-MB-468 cells were killed when they developed one or more of the following signs: hind limb paralysis from suspected spine metastasis, excessive weight loss, visible tumors, or labored breathing from lung metastasis. Lungs and bilateral axillary contents were collected in formalin for hematoxylin and eosin slide preparation. Animals injected with TMD-436 cells or DU4475 cells were killed 10 weeks after intracardiac injection. Lungs from animals injected with MDA-MB-468 cells (two animals) were digested with collagenase and hyaluronidase, and cancer cells were sorted by flow cytometry using PE-conjugated CD326 (EpCAM, #130-091-253; Miltenyi Biotech, Auburn, CA, USA) for enriching cancer cells. CD326-positive cells were evaluated for CD44 and CD24 status immediately after sorting or 1 week after sorting.

The invasion assay was performed as recommended by the manufacturer of the invasion assay kit (#ECM554; Chemicon International, Temecula, CA, USA). Briefly, cells were serum starved for 24 hours and 50,000 cells were placed on the top insert with matrigel. Serum-free media or media with 10% serum were placed in the bottom well. The number of cells that invaded through the matrigel was calculated using fluorometric assay. For each cell line, the fluorometric reading from bottom wells with the serum-free media was defined as one unit to determine relative change in invasion in the presence of 10% serum. Each experiment contained one or two wells without serum and two wells with serum for each cell line. The experiment was repeated twice for most cell lines except for MCF-7, which was done thrice.

To test the hypothesis that human breast cancer cell lines differ in the proportion of CD44 +/CD24 - cells, we characterized 13 breast cancer cell lines by flow cytometry for surface expression of CD44 and CD24. In addition to parental cell lines, derivatives of MDA-MB-231 and MDA-MB-436 cells were analyzed. TMD-231 cells were derived from MDA-MB-231 cells grown in the mammary fat pad of nude mice. LMD-231 cells were derived from MDA-MB-231 cells that had metastasized to lung from the mammary fat pad of nude mice [ 23]. TMD-436 cells were derived from MDA-MB-436 cells grown in the mammary fat pad of nude mice. A representative flow cytometry analysis of TMD-231, TMD-436, MCF-7, Hs578t, and BT474 cell lines showing expression patterns of CD44 and CD24 is shown in Figure 1. Isotype control for TMD-436 is shown, although isotype controls were conducted for all cell lines investigated. In Table 1 the results of this analysis are summarized with respect to four fractions defined by these two markers: CD44 +/CD24 -, CD44 -/CD24 +, CD44 +/CD24 +, and CD44 -/CD24 -. This table also shows the tumor type and tissue source, cell of origin, and molecular classification based on gene expression profiling or expression of markers [ 24– 27]. According to this classification, CK19 is expressed predominantly in cell lines of luminal type whereas CK5, CD10, and ETS1 are expressed in cell lines of basal origin. Vimentin is expressed in cell lines of mesenchymal type. MDA-MB-231 and its derived cell lines TMD-436, Hs578T, SUM1315, and HBL-100 all possessed an increased CD44 +/CD24 - subpopulation (>30%). The immortalized human breast epithelial cell line MCF10A also contained a CD44 +/CD24 - subpopulation. However, the percentage of the CD44 +/CD24 - subpopulation in this cell line varied markedly from experiment to experiment, and appears to be dependent on the serum used for cell culture. This was not the case with transformed cell lines. Also, note that the parental and tumor-derived variants of MDA-MB-231 and MDA-MB-436 had similar CD44 +/CD24 - subpopulations.
×
Table 1
Progenitor cell properties (CD44 +/CD24 -) of various breast cancer cell lines
aPercentage of MCF10A cell progenitor and other subpopulation was influenced by species and batch of serum in culture media. AC, adenocarcinoma; CS, carcinosarcoma; IDAC, infiltrating ductal adenocarcinoma; IAC, Invasive adenocarcinoma; IDC, Invasive ductal carcinoma; ND, not determined.

The CD44+/CD24-phenotype is not sufficient to establish pulmonary metastasis

To test the hypothesis that CD44 +/CD24 - phenotype is sufficient for the establishment of metastasis in vivo, we tested the ability of these cell lines to establish pulmonary metastasis after intracardiac injection. In addition to the requirement of invasive property, metastatic cells should have the following properties: survival in circulation, adherence to target organ, extravasation, and initiation of growth at the metastatic site. Intracardiac injection of cancer cells into nude mice allows assessment of the metastatic capacity of cancer cells subsequent to entry into circulation [ 14, 15, 21, 30– 33]. Nude mice injected with cells were monitored for visible symptoms of metastasis for up to 10 weeks. The metastasis pattern of each of the cell lines tested is summarized in Table 2. TMD-231 injected animals exhibited signs of metastasis as early as 6 weeks, with most animals affected by 10 weeks. Metastatic growth was detected in vertebrae, limbs, chest wall, sternum, jaw, and scapula. Histologic staining further revealed metastatic growths in lungs (Figure 4a). Bone and visceral organ metastasis was further confirmed by dual energy X-ray absorptiometry scans and high-resolution Faxitron images (Figure 4b) and necropsy. Note that animals injected with either parental MDA-MB-231 or LMD-231 cells exhibited a similar pattern of metastasis (data not shown). Although without bone metastasis, animals injected with MDA-MB-468 cells had severe morbidity and mortality. In contrast, animals injected with parental MDA-MB-436, TMD-436, Hs578T, SUM1315, or DU4475 cells did not show any symptoms of metastasis even 10 weeks after intracardiac injection. A representative Faxitron image of an animal injected with TMD-436 cells is shown in Figure 4b. Lungs of animals injected with MDA-MB-468 or TMD-436 (6/8), but not Hs578T, SUM1315, or DU4475 cells, showed extensive growth of cancer cells (Table 2 and Figure 4a). Thus, the CD44 +/CD24 - phenotype, while associated with invasion, is not sufficient for establishment of metastasis.
Table 2
Metastasis pattern of breast cancer cell lines injected into nude mice via intracardiac route
×

Molecular profiling studies have classified breast cancers to five types with distinct prognostic significance: luminal type A, luminal type B, ErbB2-positive, normal-like, and basal type [ 28, 29]. Patients with luminal type A tumors have the most favorable prognosis, whereas patients with basal-type tumors have worst prognosis. Breast cancer cell lines have also been classified into five groups – luminal, basal, mesenchymal, ErbB2-positive, and myoepithelial – based on gene expression profiling [ 25, 27]. As per gene expression profiling, basal and mesenchymal cells are similar except for differential expression of 227 genes. Interestingly, all cell lines that contained CD44 +/CD24 - population are in the basal/mesenchymal or the myoepithelial group (Table 1). Thus, stem/progenitor cells for luminal and ErbB2-positive breast cancers, which represent the majority of breast cancers, remain to be identified. In this regard, a 'side population' of cells with high drug efflux capacity has been described as cancer stem cells for breast cancer, lung cancer, and glioblastoma [ 46, 47]. These side population cells have been identified in breast cancer cell lines of luminal type, and these cells overexpress transporter genes ABCG2 (ATP-binding cassette, subfamily G, member 2) and ABCA3 (ATP-binding cassette, subfamily A, member 3) [ 46]. Cells that express higher levels of CD24 in mouse are defined as luminal epithelial cells, and Lin -CD29 hiCD24 + cells have been defined as mammary stem cells in mouse [ 48, 49]. Note that all luminal cell types contain disproportionately higher levels of CD44 -/CD24 + cells (Table 1), and this population may contain cancer progenitor cells corresponding to luminal type of tumors. Identification of cancer stem cells specific for luminal cells, which represent about 70% of breast cancers, may allow improved understanding of signaling events that are involved in discrete steps of breast cancer progression, including metastasis.

We thank Dr YC Yang for IL-11 cDNA, and SE Rice for assistance in flow cytometry. We thank Drs Edward Chen, Daniela Matei, and David Donner for critical reading of this manuscript. This work was supported by the grants from the American Institute for Cancer Research (03A069-REN), the National Cancer Institute (R01-CA89153) and Indiana University Cancer Center Pilot Grant (to HN). HN is Marian J Morrison Investigator in Breast Cancer Research. 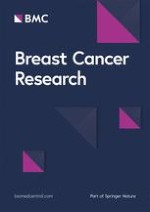 High-throughput genomic technology in research and clinical management of breast cancer. Exploiting the potential of gene expression profiling: is it ready for the clinic?

A comprehensive analysis of the androgen receptor gene and risk of breast cancer: results from the National Cancer Institute Breast and Prostate Cancer Cohort Consortium (BPC3)