The online version of this article (doi:10.​1007/​s00167-017-4618-3) contains supplementary material, which is available to authorized users.
Benedikt Schliemann and Johannes Glasbrenner have contributed equally to this study.

Dynamic intraligamentary stabilization (DIS) has been introduced as a new technique to repair the torn anterior cruciate ligament (ACL) and to restore knee joint kinematics after an acute ACL tear. Aim of the present study was to compare the early post-operative activity, restoration of gait pattern and functional results after DIS in comparison with primary ACL reconstruction (ACLR) for acute ACL tears. It was hypothesized that functional results, post-operative activity and changes in gait pattern after DIS are comparable to those after ACLR.

Sixty patients with acute ACL tears were included in this study and underwent either DIS or ACLR with an anatomic semitendinosus autograft in a randomized manner. Patients were equipped with an accelerometric step counter for the first 6 weeks after surgery in order to monitor their early post-operative activity. 3D gait analysis was performed at 6 weeks and 6 months after surgery. Temporal-spatial, kinematic and kinetic parameters were extracted and averaged for each subject. Functional results were recorded at 6 weeks, 6 months and 12 months after surgery using the Tegner activity scale, International Knee Documentation Committee score and Lysholm score.

Patients who underwent DIS showed an increased early post-operative activity with significant differences at week 2 and 3 (p = 0.0241 and 0.0220). No significant differences between groups were found for knee kinematic and kinetic parameters or the functional scores at any time of the follow-up. Furthermore, the difference in anterior tibial translation was not significantly different between the two groups (n.s.).

Early functional results and changes in gait pattern after DIS are comparable to those of primary ACLR. Therefore, ACL repair may be an alternative to ACLR in this cohort of patients. 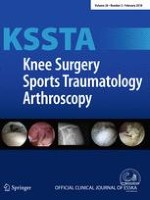