Barrett’s esophagus is common in Western countries, but progression to esophageal adenocarcinoma is uncommon. Chemoprevention therefore needs to consider whether benefits outweigh risks given an otherwise healthy population. This will depend on the particular population at risk and the relative safety of a potential preventive agent. Most evidence regarding the potential benefit of chemoprevention of Barrett’s esophagus and prevention of progression to esophageal adenocarcinoma is based on observational studies such as case–control and cohort studies. Given the potential benefits and relatively low risks, patients with BE should receive once-daily PPI therapy, but routine use of twice-daily PPI is not recommended unless necessitated by poor control of reflux symptoms or esophagitis. Recent data suggest that the inverse associations between aspirin/NSAID use and esophageal adenocarcinoma may be the result of reducing neoplastic progression (from metaplasia to dysplasia and carcinoma) rather than initiation of Barrett’s esophagus. While substantial associative data suggest a potential benefit of aspirin and nonaspirin NSAIDs in reducing the risk of progression of Barrett’s esophagus, the low risk of progression and the potential risks (gastrointestinal bleeding, complicated ulcer disease, hemorrhagic stroke) do not warrant routine use, unless dictated by cardiovascular risk. Chemoprevention after mucosal ablation in those at highest risk of post-ablation recurrence (dysplastic Barrett’s) is currently under investigation. 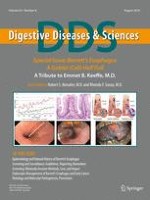 Natural History of the Post-ablation Esophagus

Screening and Surveillance for Barrett’s Esophagus: Is It Cost-Effective?

Origins of Metaplasia in Barrett’s Esophagus: Is this an Esophageal Stem or Progenitor Cell Disease?

A Goblet (Cell) Half Full: What Do We Really Know About Barrett’s Esophagus—A Tribute to Emmet Keeffe

Point–Counterpoint: Screening and Surveillance for Barrett’s Esophagus, Is It Worthwhile?