Acromegaly in infancy is extremely rare. We describe a 32 year old woman who presented at 6 months of age with isolated macrocephaly, followed by accelerated linear growth. At 21 months of age, her head circumference was 55 cm (+5.5 SD), height was 97.6 cm (+4.4 SD) and weight was 20.6 kg (+6.2 SD). She had markedly elevated levels of growth hormone (GH) (135 ng/ml), IGF-1 (1540 ng/ml) and prolactin (370 ng/ml). A pituitary macroadenoma was surgically resected. Immunohistochemical staining was positive for GH. Post-operatively, she developed ACTH and TSH deficiency and diabetes insipidus.

Despite GH deficiency, she grew well until 7 ½ years old, with subsequent decline in growth velocity, and received GH therapy for 5 years. Puberty was initiated with estrogen therapy. As an adult, she has no stigmata of acromegaly, with a height of 164.5 cm and non-acromegalic features. IGF-1 has remained in the low normal range. Prolactin has been mildly elevated. Serial MRIs have shown no evidence of tumor recurrence. She receives replacement therapy with hydrocortisone, levothyroxine and DDAVP. Chromosomal microarray analysis revealed that she has X-linked acrogigantism (X-LAG) due to a de novo duplication of Xq26.3 (516 kb). She recently became pregnant following ovarian stimulation and chorionic villus sampling revealed that she is carrying a male with the same duplication. 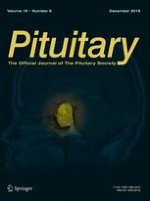 Low frequency of cardniac arrhythmias and lack of structural heart disease in medically-naïve acromegaly patients: a prospective study at baseline and after 1 year of somatostatin analogs treatment

Sex differences in the prevalence of metabolic syndrome and its components in hypopituitary patients: comparison with an age- and sex-matched nationwide control group

Pituitary tumors in MEN1: do not be misled by borderline elevated prolactin levels