This study aimed to identify prognostic factors for patients with ICC after a curative resection and clarify the appropriate indications for surgical resection and postoperative adjuvant chemotherapy.

This retrospective study included 81 patients who underwent curative resection for ICC between April 1995 and December 2014. Kaplan–Meier and Cox regression models were used to analyze the effects of clinicopathological features on overall and recurrence-free survival.

Surgical resection with curative intent combined with regional lymph node dissection should be indicated for ICC patients with normal CA19-9 levels. Postoperative adjuvant chemotherapy should be administered to high-risk patients with a positive nodal status. 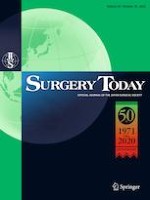 Sarcopenia as an independent predictor of the surgical outcomes of patients with inflammatory bowel disease: a meta-analysis