Huntington’s disease is characterized by disorders of movement, cognition and behavior. Individuals with Huntington’s disease display aberrant changes in the autonomic nervous system that are detected even before the onset of other symptoms. Subtle cognitive dysfunction may start before other clinical manifestations. The aim of the present study was to investigate the autonomic nervous system response to mental arithmetic and the relationship between the autonomic and cognitive/motor function in presymptomatic and early Huntington’s disease. We examined 15 presymptomatic Huntington’s disease gene carriers (PHD), 15 early Huntington’s disease patients (EHD) and 30 healthy controls. PHD and EHD groups were determined according to Unified Huntington’s Disease Rating Scale (UHDRS) motor score. ECG, heart rate, systolic and diastolic blood pressure, and cutaneous laser Doppler flux were measured during rest and during a simple mental arithmetic test. UHDRS cognitive test battery was applied to determine cognitive dysfunction. During mental arithmetic, the heart rate of PHD/EHD increased significantly less than that of controls. Decreased microvascular response to mental arithmetic was found in EHD. Significant correlations for the PHD/EHD group were found between laser Doppler flux response and Symbol Digit Modalities Test score, and between laser Doppler flux response and UHDRS motor score. It seems that central autonomic dysregulation of cardiovascular system in Huntington’s disease goes along with the degeneration of other central neuronal systems. This finding is relevant as it could enable simple and noninvasive testing of disease progression. 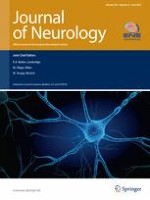 Diagnosis of asymptomatic natalizumab-associated PML: are we between a rock and a hard place?

A multimodal approach to understanding motor impairment and disability after stroke

Influence of serum uric acid levels on prognosis and survival in amyotrophic lateral sclerosis: a meta-analysis