main-content
nach oben
Zurück zum Suchergebnis
​
print
Inhaltsverzeichnis
​
insite
Ausgabenarchiv
​
archive
​
insite
Drucken
​
print
» Jetzt Zugang zum Volltext erhalten
Wichtige Hinweise
The original version of this article was revised: One of the author names was published incorrectly as "Boonchu Sritularuk" and the name is corrected in this version.
A correction to this article is available online at https://​doi.​org/​10.​1007/​s11418-018-1200-3.

The life-threatening potential of lung cancer has increased over the years due to its acquisition of chemotherapeutic resistance, especially to cisplatin, a first-line therapy. In response to this development, researchers have turned their attention to several compounds derived from natural origins, including cypripedin (CYP), a phenanthrenequinone substance extracted from Dendrobium densiflorum. The aim of the present study was to investigate the ability of CYP to induce apoptosis and enhance cisplatin-mediated death of human lung cancer NCI-H460 cells using cell viability and apoptosis assays. The induction of apoptosis by CYP was observed at a concentration of > 50 μM with the appearance of morphological changes, including DNA condensation and chromatin fragmentation. Together with, CYP was able to activate caspase-3 and downregulate the anti-apoptotic proteins Bcl-2 and Bcl-xL. Also, a non-cytotoxic dose of CYP synergistically potentiated the effect of cisplatin in non-small cell lung cancer line H460 cells, which clearly exhibited the apoptotic phenotype. Western blot analysis revealed that the underlying mechanism involved the downregulation of anti-apoptotic Bcl-xL, whereas the levels of other apoptotic regulatory proteins were not altered. This study provides interesting information on the potent effect of CYP as a chemotherapeutic sensitizer that could be further developed to improve the clinical outcomes of lung cancer patients. 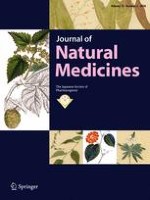 Terpenoids from Vitex trifolia and their anti-inflammatory activities