The pinworm (Enterobius vermicularis) causes mostly mild infections characterised by nocturnal anal pruritus, mainly in children. Still, the infection is stigmatising and sleep disturbances may lead to lack of concentration. For Germany, no epidemiological data are available. Laboratory data of all patients for whom detection of E. vermicularis by cellulose tape test had been requested between 2007 and November 2017 were analysed retrospectively. E. vermicularis was detected in 971/5578 (17.4%) samples collected from 3991 patients. The detection rate increased significantly within the period of investigation. It was higher in male than in female patients (20.0 vs. 15.4%). Children 4 to 10 years old and, if also examined, their relatives were most frequently affected. Control investigations at an interval of at least 1 month, which could indicate insufficient therapy or re-infection, were performed in 90/714 patients (12.6%). While parasite detection in children < 6 years was evenly distributed throughout the year, in older patients, it peaked between October and December. In conclusion, in the area of investigation, the frequency of E. vermicularis is higher in males than in females and is subject to a hitherto undescribed seasonality. The causes of the increased frequency of parasite detection warrant further investigations. 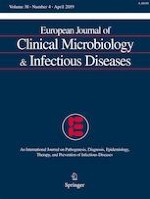 Current mentorship practices in the training of the next generation of clinical microbiology and infectious disease specialists: an international cross-sectional survey