The online version of this article (https://​doi.​org/​10.​1007/​s10067-018-4172-5) contains supplementary material, which is available to authorized users.
The original version of this article was revised due to a retrospective Open Access order.
Thibault de Chalus was an employee of UCB Pharma at the time of the study.
Caroline Dreuillet was an employee of Arthritis Fondation Courtin at the time of the study.
A correction to this article is available online at https://​doi.​org/​10.​1007/​s10067-018-4241-9.

Misinterpretation of patient beliefs may complicate shared decision-making in rheumatoid arthritis (RA) or axial spondyloarthritis (axSpA). The objective of this study was to develop a questionnaire to assess patients’ beliefs about their disease and its treatment, and to identify patient characteristics associated with these beliefs. All beliefs reported by > 5% of 50 patients in a previous study were reformulated with a partnering patient organization into statements with which participants could rate their agreement on a scale of 0–10 (totally disagree to totally agree). The resulting Questionnaire for Arthritis Dialogue (QuAD) was made available to patients with RA or axSpA. A score ≥ 7 was considered a strongly held belief. Associations between patient characteristics and individual lifestyle beliefs were assessed using multiple logistic regression. The 21-item QuAD was completed by 672 patients (432 RA, 240 axSpA; mean [±SD] age 54.2 [± 14.2]; 63.7% female). The most widely held beliefs were related to uncertainty about progression (n = 354, 54.0%), heredity (n = 309, 47.8%), and flare triggers (n = 283, 42.7%). The unwarranted belief that physical activity is deleterious to disease activity was associated with markers of psychological distress and lower educational levels. The beliefs of patients with RA or axSpA about their disease are wide-ranging. Since these may be unwarranted and may lead to inappropriate behaviors, physicians should discuss these beliefs with their patients. The QuAD may facilitate this dialogue, and may also be useful in population studies to standardize the assessment and evolution of beliefs over time. People with long-term inflammatory conditions such as rheumatoid arthritis (RA; inflammation of the joints) and axial spondyloarthritis (axSpA; inflammation of the spine) may hold a number of beliefs about their disease, including some that are not supported by current scientific evidence (e.g., “I think that my disease was triggered by a vaccination”). Some beliefs, especially those relating to the role of lifestyle factors (such as exercise, diet, smoking, and drinking alcohol), may encourage people living with severe diseases to change their behavior in a way that has an effect on their disease. Within this project, we developed a questionnaire to identify the most common beliefs held by people living with RA or axSpA, which is called the “Questionnaire for Arthritis Dialogue (QuAD).” We also examined whether certain characteristics (or traits) of people living with RA or axSpA are linked to beliefs not currently supported by scientific evidence. A total of 672 people living with RA or axSpA in France were asked to complete the questionnaire (QuAD). The questionnaire included 21 opinion statements that they scored from 0 (totally disagree) to 10 (totally agree). A score of more than 7 was interpreted to mean that the person significantly agreed with the opinion. Based on the responses to specific opinion statements in the questionnaire, we were able to identify possible links between beliefs that are not supported by scientific evidence (e.g., “I think that flare-ups of my disease are triggered by physical effort”), and characteristics of people living with severe diseases. Our findings suggested that beliefs about lifestyle and inflammatory diseases varied from person to person, were sometimes inconsistent (the most widely held beliefs were sometimes contradictory), and were often not supported by scientific evidence. The belief that physical activity had negative effects on the disease was linked to poor education and psychological issues (such as anxiety and helplessness). People living with axSpA were more likely to believe their disease was a result of their genetic make-up, whereas those with RA more often believed their disease was caused by emotional issues. People living with axSpA were also more likely to believe that physical activity could be beneficial for their disease, and less likely to believe that their disease was caused by smoking. Our results suggest that doctors need to discuss with their patients how they might believe lifestyle is associated with their disease. This will help to dispel any unnecessary concerns, and to encourage their patients to take up healthy lifestyles and habits that are beneficial for their disease management. It may also be beneficial for health care providers to discuss the beliefs identified in this study during educational programs about inflammatory diseases, for the benefit of people living with RA or axSpA. 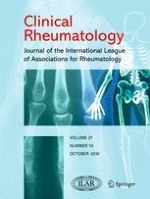 Baricitinib, a Janus kinase inhibitor, in the treatment of rheumatoid arthritis: a systematic literature review and meta-analysis of randomized controlled trials

Coffee consumption and the risk of rheumatoid arthritis and systemic lupus erythematosus: a Mendelian randomization study