Anti-vascular endothelial growth factor (VEGF) drugs are used to treat neovascular eye diseases. Some of these drugs contain Fc fragments (Fc), but it is unknown how their mode of action is influenced by Fc. Therefore, this study investigated the effects of Fc on rat eyes after intravitreal injection.

Eighteen Long–Evans rats were intravitreally injected with sterile, biotin-labeled rat Fc (9.1 μg in 5 μl PBS). For control, 5 μl PBS was injected in another nine rats. Animals were sacrificed between 1 and 3 days (group 1), 7 days (group 2), and 14 days (group 3) after injection. The right eyes were examined by electron microscopy (EM). The left eyes were stained by immunohistochemistry to investigate the distribution of Fc and the presence of macrophages.

After 1 day, Fc had penetrated into the anterior chamber and the retina up to the inner nuclear layer, and was located especially in retinal vessels. High numbers of infiltrating cells were present within the vitreous, around the ciliary body, anterior chamber and inside the retina 1–3 days after Fc injection (p < 0.02 group 1 vs. control). Immunohistochemistry and EM showed that they were macrophages or granulocytes in close association with Fc. Ultrastructurally, there were effects on the blood vessels such as thrombocyte activation and fibrin formation.

Biotin labeling is ideal for investigating the distribution of intravitreally injected proteins in ocular tissue. Fc fragments at a dose corresponding to their concentration in standard AMD treatments induced inflammation, and particularly the attraction of immune-competent cells. This may be associated with the risk of inflammation or endophthalmitis after anti-VEGF treatment, and needs further investigation. 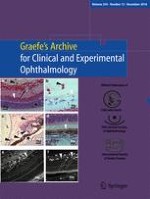