Current evidence regarding the use of exercise therapy in the treatment of adolescent idiopathic scoliosis (AIS) was assessed with a review of published literature.

An extensive literature search was carried out with commonly used medical databases. A total of 155 papers were identified out of which only 12 papers were deemed to be relevant.

There were nine prospective cohort studies, two retrospective studies and one case series. All studies endorsed the role of exercise therapy in AIS but several shortcomings were identified—lack of clarity of patient recruitment and in the method of assessment of curve magnitude, poor record of compliance, and lack of outcome scores. Many studies reported “significant” changes in the Cobb angle after treatment, which were actually of small magnitude and did not take into account the reported inter or intra-observer error rate. All studies had poor statistical analysis and did not report whether the small improvements noted were maintained in the long term. 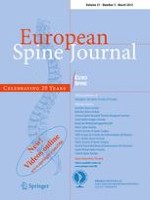 Erratum to: Prevalence of sleep disturbance in patients with low back pain

Are Modic changes prognostic for recovery in a cohort of patients with non-specific low back pain?

Postural balance in low back pain patients: criterion-related validity of centre of pressure assessed on a portable force platform