Endoscopic surveillance of Barrett’s esophagus has become a foundation of the management of esophageal adenocarcinoma (EAC). Surveillance for Barrett’s esophagus commonly involves periodic upper endoscopy with biopsies of suspicious areas and random four-quadrant biopsies. However, targeted biopsies using narrow-band imaging can detect more dysplastic areas and thus reduce the number of biopsies required. Several specific mucosal and vascular patterns characteristic of Barrett’s esophagus have been described, but the proposed criteria are complex and diverse. Simpler classifications have recently been developed focusing on the differentiation between dysplasia and non-dysplasia. These include the Japan Esophageal Society classification, which defines regular and irregular patterns in terms of mucosal and vascular shapes. Cancer invasion depth is diagnosed by endoscopic ultrasonography (EUS); however, a meta-analysis of EUS staging of superficial EAC showed favorable pooled values for mucosal cancer staging, but unsatisfactory diagnostic results for EAC at the esophagogastric junction. Endoscopic resection has recently been suggested as a more accurate staging modality for superficial gastrointestinal cancers than EUS. Following endoscopic resection for gastrointestinal cancers, the risk of metastasis can be evaluated based on the histology of the resected specimen. European guidelines describe endoscopic resection as curative for well- or moderately differentiated mucosal cancers without lymphovascular invasion, and these criteria might be extended to lesions invading the submucosa (≤ 500 μm), i.e., to low-risk, well- or moderately differentiated tumors without lymphovascular involvement, and < 3 cm. These criteria were confirmed by a recent study in Japan. 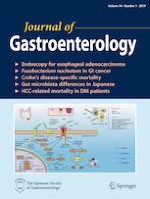 Efficacy and safety of sofosbuvir–velpatasvir with or without ribavirin in HCV-infected Japanese patients with decompensated cirrhosis: an open-label phase 3 trial

Impact of endoscopic ultrasonography on diagnosis of pancreatic cancer