Microbial dysbiosis has been found preceding necrotizing enterocolitis (NEC) in preterm infants; thus, we aimed to investigate whether there is evidence that neonates with extended-spectrum beta-lactamase-producing Enterobacterales (ESBL-E) positive stool cultures are at higher risk for NEC at the NICU.

We included very preterm inborn infants of ≤ 32 weeks of gestational age being fecal carriers of ESBL-E and compared them with 1:1 matched (gestational age, birth weight, gender and year) controls tested negative for ESBL-E in the stool between 2005 and 2016. An association with NEC was defined as the first detection of ESBL-E before or at the time of definite diagnosis of NEC.

We observed a threefold increase of ESBL-E in stool surveillance cultures during study time and germs were dominated by ESBL-producing Klebsiella spp. There was no evidence that preterm infants colonized with ESBL-E in the stool were at higher risk for definite NEC. 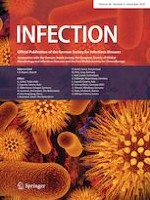 Bloodstream infection due to Enterobacter ludwigii, correlating with massive aggregation on the surface of a central venous catheter