Sleeve gastrectomy (SG) is a widely accepted procedure that has gained popularity among both bariatric surgeons and patients. There is still limited data in the literature on the formation of gallstones following laparoscopic sleeve gastrectomy, and so the present study determines the incidence of and potential risk factors related to the development of gallstones following laparoscopic sleeve gastrectomy. The data of patients who underwent laparoscopic sleeve gastrectomy at a single center due to morbid obesity between January 2014 and December 2017 was retrospectively reviewed and analyzed. The patients were divided into two groups, as those with gallstones detected on ultrasound at 12 months and those without gallstones. Data of the two groups was compared. BMI did not differ significantly between patients with positive (+) and negative (−) ultrasound findings (p > 0.05). Aside from age, hypertension, and coronary artery disease, other preoperative parameters showed no significant association with the development of gallstones in USG (−) and USG (+) patients. The present study identified no significant relationship between a decrease in BMI following LSG and the postoperative development of gallstones. Preoperative hypertension and coronary artery disease were found to be significantly related to the development of gallstones after surgery. The authors suggest that patients with preexisting CAD and hypertension in the preoperative period must be followed-up with ultrasound more meticulously. 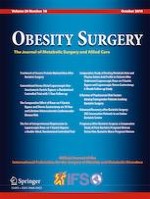 Assessing Motivational Stages and Processes of Change for Weight Management Around Bariatric Surgery: a Multicenter Study

Obesity in Patients with Endometrial Cancer: May It Affect the Surgical Outcomes of Laparoscopic Approach?