Increased infection recurrence appears to be independent predictor of the risk of developing T1D [ 1] and impaired carotid artery elasticity [ 2], an index of early atherosclerosis [ 3]. Endothelial cell damage and inflammation are central in atherogenesis. Inflammation is involved not only in the initiation and progression of atherosclerosis, but also in the occurrence of its complications such as myocardial infarction and stroke [ 4]. Both bacterial and viral infections correlate to preatherosclerotic changes in the arteries and coronary disease [ 5]. Experimental animal studies have more consistently provided evidence for deleterious effects of various infectious pathogens on arterial structure [ 6– 8]. These effects seem to be more prominent in vessels from younger animals, and appear to correlate with the number of inoculations [ 9]. Nonetheless, negative studies have been reported as well [ 10].
Atherosclerosis develops faster in children with T1D [ 11]. Several genes within the HLA region encoding antigen-presenting molecules with role in the autoimmune cascade in T1D have been shown to associate with damage to vascular endothelium in vitro [ 12]. Experimental studies have shown that, in an inflammatory milieu, HLA may be quickly translocated to endothelial cell surface, thereby contributing via antigen presentation to intravascular (in arteries) or extravasal (in microcirculation) accumulation of T lymphocytes [ 12, 13].
Anzeige
The genetic HLA-related susceptibility is recognized in more than 80% of young patients with T1D [ 14]. We have earlier reported in a cross-sectional study of children and young adults with T1D that diabetes duration, body mass index, and glycosylated haemoglobin were strongly associated with brachial artery and cutaneous microvascular endothelial dysfunction in patients with HLA-DQ 2/8 but not in those without this genotype [ 15, 16]. The risk of endothelial damage seemed to increase further in patients with inflammatory activity, suggesting a possible interplay between systemic inflammation and HLA in vascular injury.
The HLA-mediated presentation of autoantigens by vascular endothelial cells, a key-event in the transmigration of auto reactive T-cells and diabetes development, seems to occur systemically [ 13]. This could perhaps explain previous findings of elevated levels of endothelial cell activation markers in children with genetic risk for T1D before the onset of the disease [ 17].
Serum and plasma matrix metalloproteinase-8 (MMP-8) levels have been demonstrated to reflect disease severity and plaque instability in cardiovascular diseases [ 18]. MMP-8 concentrations are increased during acute coronary syndrome [ 19] and in young individuals with subclinical atherosclerosis [ 20].
In the present prospective study, we investigated whether DQ2/8, acute infections and plasma MMP-8 concentrations in children and young adults with T1D associate with adverse changes in arterial function and intima-media thickness.
Anzeige

Eighty children and adolescents (37 male and 43 female) with age between 8 and 20 (mean age 15) years with T1D duration for at least 6 months were recruited from the paediatric outpatient diabetes clinic at the Lund University Hospital. All patients were treated with daily insulin injections. Exclusion criteria were: family history for other major cardiovascular risk factors (primary hypercholesterolemia, hypertension, premature coronary and cerebrovascular disease), active smoking, systemic hypertension, asthma and allergy. None of the patients were on corticosteroids or other type of immunosuppressive medication. All patients were followed for 1.40 ± 0.02 years (range 1.1–2.0 years).
Body weight, height, and arterial blood pressure (systolic and diastolic) were measured at both visits. Data on demographic information were collected via questionnaire. Data on diabetes duration were obtained from the registry of the outpatient diabetes clinic.
Detailed infection history including type and number of acute infections during the past year, duration and severity of symptoms, medication if any, and time between the latest infection and the ultrasound visits was also determined by questionnaire. Acute infection was defined by clinical symptoms. Patients were grouped in relation to the number of infections during the past year as follows: group 1 = 0 to 1 infection (low frequency), group 2 = 2 to 3 infections (moderate frequency), and group 3 = ≥ 3 infections (high frequency).
Patients were also grouped based on the hsCRP levels as follows: ≤ 1 and > 1.0 mg/l.

A high-resolution ultrasound system (Acuson Sequoia C512, Siemens AG, Germany) equipped with a 15 MHz probe was used [ 31]. Longitudinal scans in bi-dimensional mode of the 1-cm-long distal end of the left common carotid artery were imaged so that the lumen-intima and media-adventitia interfaces were distinguishable. All images corresponded to the R-wave on electrocardiogram (ECG). Four scans obtained from each individual were recorded on videotape for offline analysis of carotid intima-media thickness (cIMT). Two sonographers unaware of the infection and genetic status carried out the ultrasound examination. The mean cIMT was measured from each scan manually. cIMT obtained from all scans from the same subject were averaged and the resulted mean cIMT was used for statistical analyses. The percent change of cIMT (% cIMT) was calculated. Carotid artery compliance (CAC) was calculated according to the following formulas: CAC = ([ D s −  D d]/ D d)/( P s −  P d), where D s is systolic diameter, D d is diastolic diameter, P s is systolic blood pressure, and P d is diastolic blood pressure. CAC reflects the ability of arteries to expand in response to the pulse pressure caused by cardiac contraction and relaxation. In a prior reproducibility study on 10 randomly selected patients, the coefficient of inter-observer variability was 6.2%.
Anzeige

Longitudinal scans of the brachial artery (non-dominant arm) were imaged several centimetres above the antecubital fossa via a 15-MHz linear ultrasound transducer of an Acuson Sequoia ™ C512 (Siemens AG, Germany) [ 32]. The ultrasound beam frequency was set at 8 MHz. Once the image was obtained, the transducer was positioned throughout the ultrasound study with aid of a transducer arm. ECG-gated end-diastolic scans of the artery were recorded at baseline, and a pressure cuff tourniquet placed around the forearm was thereafter inflated to 200 mmHg (minimum 50 mmHg over the systolic blood pressure) for 5 min. A new series of frames were taken for 15 s before and 120 s after cuff deflation. Following a 10-min recovery period, additional frames were taken before and over a 4-min period after sublingual administration of 400 µg glycerol trinitrate (GTN spray). The latter was used as endothelium-independent vasodilator. Flow-mediated and GTN-induced brachial artery dilatations were expressed as maximum percent dilatation following cuff deflation and GTN administration, respectively.

Differences in the studied variables were assessed by ANOVA, and adjusted for covariates by ANCOVA. Eventual correlations between the hypothesised predictor variables and the dependent variable were assessed by logistic regression. When significant, multiple regression models were used to identify independent factors affecting the vascular indexes. hsCRP was logarithmically transformed due to its skewed distribution. All other numeric variables showed a Gaussian distribution. “cIMT progression” was defined as % increase in cIMT at 18 months from the baseline. Similarly, changes in FMD and CAC over the follow-up period were expressed as % change at 18 months from the corresponding baseline values.
All data are expressed as mean ± SD unless otherwise specified. Statistical significance was accepted when p was less or equal to 0.05. All statistical analyses were performed with StatView for Windows (version 5.0, SAS Institute, USA).

In a multivariate model adjusted for age, BMI, diabetes duration, HbA1c, and the number of RTI during the year prior to the baseline ultrasound, infection frequency showed a significant relationship to % cIMT (Table  2). % cIMT was most increased in patients with > 3 RTI/year (Fig.  5a). When patients were divided on the basis of the genotype, the correlation between infection frequency and % cIMT remained significant only in DQ2/8 patients (Fig.  5b).
Table 2
Multivariable regression analysis of % change in cIMT
×

There is solid evidence for association of T1D with premature carotid atherosclerosis in childhood [ 11]. In the present study of diabetic children and adolescents with and without HLA DQ2/8, we found suggestive evidence of accelerated structural changes (expressed as increase of % IMT) in those positive for this genotype. Carotid artery intima-media thickness increased most significantly in DQ2/8 patients that experienced three or more respiratory tract infections per year. Of note, the % change of cIMT was inversely related to the % change in both CAC and FMD. Neither CAC nor FMD did change significantly over the study period in relation DQ2/8. Similar to our study, Halcox et al. [ 22] in 2009 found decrease of FMD with averaged annual progression of cIMT.
Anzeige
Matrix metalloproteinases (MMPs) are structurally related but genetically distinct enzymes that can degrade almost all extracellular matrix components. Especially MMP-8 or collagenase-2 can also process various non-matrix bioactive substrates. Due to such decisive substrate cleavage(s) MMP-8 can mediate surrogate destructive pro-inflammatory immune reactions [ 23– 25]. Many inflammatory cells secrete MMPs, which remodel the matrix facilitating thus the leukocyte traffic through tissues [ 26]. Among DQ2/8 patients, CRP levels > 1 mg/l was associated with elevated MMP-8, a biomarker of both systemic inflammatory and intravascular inflammation. In adults, high serum MMP-8 is an independent risk factor for incident cardiovascular events [ 20].
Functional disturbances in the vasculature such as endothelial vasomotor dysfunction and decreased arterial elasticity are important signs of early vascular disease, and associate with arterial intima thickening [ 27]. In a prior cross-sectional study from our centre, higher frequency of respiratory tract infections in T1D was linked to impaired carotid artery elasticity especially in those exposed to passive tobacco smoking [ 2]. Infection is a powerful trigger of inflammation in the body, being earlier associated to arterial endothelial cell damage and intima-media thickening in mice, piglets and children [ 28– 30].
Even children without conventional risk factors for atherosclerosis appear to be prone to carotid artery thickening already 3 months after an acute infectious illness [ 31]. Acute infections initiate endothelial cell dysfunction in children, and the dysfunction is worse in diabetic children than in healthy children [ 31]. In the present study carotid artery intima-media thickness increased most significantly in DQ2/8 patients that experienced three or more respiratory tract infections per year. In adults, acute respiratory infections increased the risk of acute myocardial infarction [ 32]. Symptoms of acute infections associated with increased viral and bacterial titres and increased levels of inflammatory markers precede acute coronary events [ 33].
Intuitively, given the upregulatory effects exerted by systemic inflammation on both vascular adhesion molecules and HLA molecules, their putative detrimental influences on the vascular wall would become stronger in an inflammatory environment. In patients with rheumatoid arthritis (RA), another cardiovascular risk factor with important genetic susceptibility, the mortality from cardiovascular disease was most increased in patients with RA-risk HLA and inflammatory activity [ 34].
Future large-scale studies of young patients with T1D are needed to confirm these findings and, if proven, to provide additional mechanistic insights into the putative HLA-infection interplay on vascular wall. Eventual relationship between the observed structural changes and accelerated atherosclerosis needs to be investigated as well.

Study was supported by The Flight Attendant Medical Research Institute, FL, USA (Grant No. 32115, PL), the Swedish Heart and Lung Foundation (20080472, PL), Swedish Research council (2016-01792, ÅL) and the Helsinki University Central Hospital Research Foundation (Grant No. N/A, PP) supported the study. We are most indebted to Annica Maxedius for excellent technical assistance throughout the study.

All procedures performed in studies involving human participants were in accordance with the ethical standards of the institutional and/or national research committee and with the 1964 Helsinki Declaration and its later amendments or comparable ethical standards.

All participants and/or their guardians gave a written consent.
Open AccessThis article is distributed under the terms of the Creative Commons Attribution 4.0 International License ( http://​creativecommons.​org/​licenses/​by/​4.​0/​), which permits unrestricted use, distribution, and reproduction in any medium, provided you give appropriate credit to the original author(s) and the source, provide a link to the Creative Commons license, and indicate if changes were made. 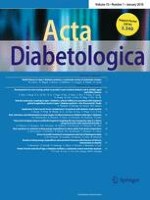 Errors in insulin treatment management and risk of lipohypertrophy