Growing evidence shows a high correlation between extensive use of central nervous system-acting drugs (CNSADs) in elderly patients and adverse drug reactions (ADRs) such as falls, fractures, and mortality.

Are results of cognitive testing with the Mini Mental Status Examination (MMSE) influenced by use of CNSADs?

Secondary combined analysis of two prospective, single-center study cohorts (PROPSYC, 2011 and AGE OUT, 2012) with identical procedure for the MMSE at a tertiary hospital.

Our analysis shows an influence of sedatives (diazepam and oxazepam, but not lorazepam) on cognitive testing with the MMSE in users of CNSADs. 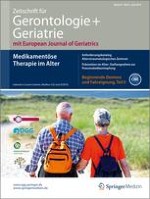