Mosquito-borne flaviviruses (MBFVs) are of public and animal health concern because they cause millions of human deaths annually and impact domestic animals and wildlife globally. MBFVs are phylogenetically divided into two clades, one is transmitted by Aedes mosquitoes (Ae-MBFVs) associated with mammals and the other by Culex mosquitoes (Cx-MBFVs) associated with birds. However, this assumption has not been evaluated. Here, we synthesized 79 published reports of MBFVs from wild mammals, estimating their host. Then, we tested whether the host specificity was biased to sampling and investigation efforts or to phylogenetic relationships using a viral phylogenetic tree drawn from analyzing whole flavivirus genomes obtained in GenBank. We found in total 18 flaviviruses, nine related to Aedes spp. and nine to Culex spp. infecting 129 mammal species. Thus, this supports that vectors are transmitting MBFV across available host clades and that ornithophilic mosquitoes are readily infecting mammals. Although most of the mosquito species are generalists in their host-feeding preferences, we also found a certain degree of MBFV’s specificity, as most of them infect closely related mammal species. The present study integrates knowledge regarding MBFVs, and it may help to understand their transmission dynamics between viruses, vectors, and mammal hosts. 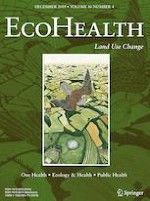 Laryngeal Demasculinization in Wild Cane Toads Varies with Land Use