The medical records of children under ten years of age with intermittent exotropia who underwent unilateral lateral recession surgery were reviewed. The operated eyes were reviewed and the fellow unoperated eyes were used as control. The rate of myopic progression was calculated by spherical equivalent (SE) changes per year, and by the rate of refractive growth (RRG) equation.

This study presents data of a large series of refractive changes secondary to lateral rectus recession, and of long-term myopia progression in Korean population. 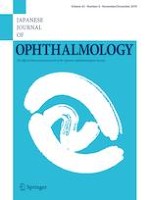 Clinical characteristics of cuticular drusen in the Japanese population