The online version of this article (doi:10.​1007/​s00345-016-1820-8) contains supplementary material, which is available to authorized users.
Harveer S. Dev and Stephanie Poo have contributed equally to this work.

Evidence of the accuracy of predictive tests in confirming the presence and grade of upper urinary tract urothelial carcinomas (UUTUC) is limited. We present the largest series evaluating the diagnostic value of pre- and intra-operative parameters in the detection of UUTUC.

We retrospectively analysed records of patients who underwent diagnostic ureteroscopy between 2005 and 2014 for suspected UUTUC. Pre-operative workup included voided urine cytology and CT imaging. Intra-operative assessments involved ureteroscopy to directly visualise suspicious lesions, and where possible selective cytology and biopsy. Primary outcomes were the visualisation of UUTUC and histopathological confirmation of tumour.

Hundred out of 160 (63 %) patients presenting with suspected upper tract malignancy had UUTUC. Voided and selective urine cytology and CT individually predicted UUTUC with a sensitivity/specificity of 63/67, 76/73, and 95/26 %, respectively. Forty out of 48 (83 %) patients who had abnormal CT and abnormal voided urine cytology had UUTUC, while 100 % of those with normal CT and normal voided cytology (investigated for ongoing symptoms) were normal. Comparing endoscopic biopsy to nephroureterectomy specimen grade, 19 (46 %), 18 (44 %), and 4 (10 %) were identical, upgraded, and downgraded, respectively.

Pre-operative investigations can predict UUTUCs. When these investigations were normal, the risk of UUTUC is negligible. In selective patients with abnormal investigations, ureteroscopy should be performed to confirm and predict the grade of UUTUC, in order to guide future management. Selective cytology is unlikely to significantly contribute to the diagnostic workup of UUTUC. 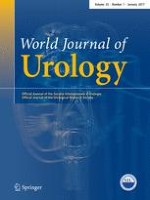 Risk factors for recurrence in female urethral diverticulectomy: a retrospective study of 66 patients