Repeated intestinal resections may have disabling consequences in patients with Crohn’s disease even in the absence of short bowel syndrome. Our aim was to evaluate the length of resected small bowel in patients undergoing elective and emergency surgery for ileocolic Crohn’s disease.

Patients undergoing emergency surgery for Crohn’s disease have a higher rate of stoma formation and 30-day complications. Laparoscopic surgery in the emergency setting has a higher conversion rate and involves resection of longer segments of small bowel. 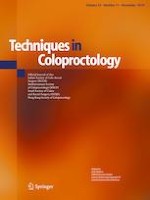 A dark polyp in the anorectum