To evaluate the 12-month effects of intravitral ranibizumab (IVR) injections on the physiology and morphology of the macula in eyes with a branch retinal vein occlusion with macular edema (BRVOME).

We studied 13 eyes of 13 patients with a BRVOME. All patients were initially treated with IVR injections at 3 consecutive monthly intervals, the initiation phase. Additional treatments were done according to the pro re nata (PRN) regimen. The physiology of the macula was assessed by the focal macular electroretinograms (fmERGs) and the best-corrected visual acuity (BCVA). The morphology of the macular area was determined by spectral-domain optical coherence tomography. The retina was assessed at the baseline, and at 3, 6, and 12 months after beginning the IVR injections. The fmERGs were elicited by a 15° circular stimulus, and also by 15° semicircular stimuli placed on the occluded or non-occluded side of the macula. The amplitudes of the a- and b-waves, photopic negative response (PhNR), and sums of the oscillatory potentials (ΣOPs) were measured. In addition, the implicit times of the a- and b-waves were measured.

The deterioration of the macular function on the occluded side during the maintenance phase suggests that there is a progression of the disease process during the PRN period in eyes with BRVOME. 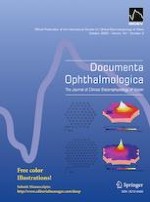