The prediction of influenza epidemics has long been the focus of attention in epidemiology and mathematical biology. In this study, we tested whether time series analysis was useful for predicting the incidence of influenza in Japan.

The method of time series analysis we used consists of spectral analysis based on the maximum entropy method (MEM) in the frequency domain and the nonlinear least squares method in the time domain. Using this time series analysis, we analyzed the incidence data of influenza in Japan from January 1948 to December 1998; these data are unique in that they covered the periods of pandemics in Japan in 1957, 1968, and 1977.

Our study suggested that MEM spectral analysis would allow us to model temporal variations of influenza epidemics with multiple periodic modes much more effectively than by using the method of conventional time series analysis, which has been used previously to investigate the behavior of temporal variations in influenza data. 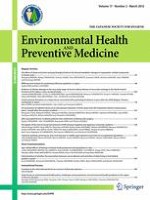 Evidence of tubular damage in the very early stage of chronic kidney disease of uncertain etiology in the North Central Province of Sri Lanka: a cross-sectional study