We compared the role of abdominal sacral colpopexy (ASCP) with concomitant supracervical hysterectomy to ASCP alone in patients with prior hysterectomy in the prevention of mesh erosion.

No significant difference was found between groups during surgery in terms of anesthesia type, total operative time, and estimated intraoperative blood loss. At mean postoperative follow-up of 7–8 months, there was no difference between groups in terms of de novo urinary symptoms, recurrent vaginal-wall prolapse, or dyspareunia and Pelvic Organ Prolapse Quantification (POP-Q) point C examination. Sling erosion was observed in four (4.2 %) patients in group A versus none in group B. Apical mesh erosion was diagnosed in one patient in group A (0.5 %) and two (2.4 %) patients in group B. These differences were not statistically significant.

Concomitant supracervical hysterectomy with ASCP was associated with a low incidence of mesh erosion and had the same intraoperative course and postoperative outcome as ASCP with previous hysterectomy. 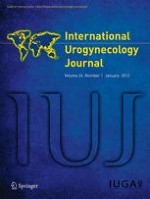 Measuring outcomes in urogynecological surgery: “perspective is everything”

Treatment of overactive bladder: what is on the horizon?